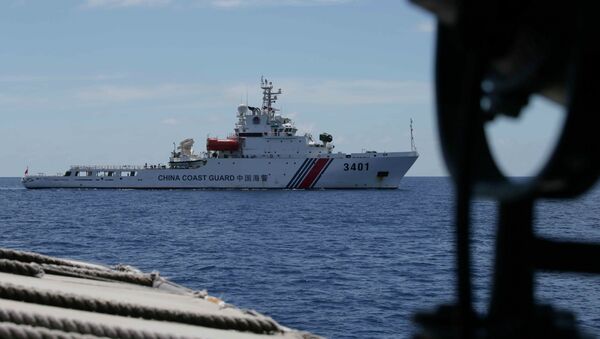 Beijing is parlaying its economic and technological development into the advancement of geostrategic goals, namely the protection of China's interests in the South China Sea and the advancement of the Beijing-led Maritime Silk Road project, according to Dr. Andrew S. Erickson, an Associate Professor in the Strategic Research Department at the US Naval War College (NWC), and his colleague, research intern Kevin Bond.

"Starting in 2001, China made a conscious effort to expand and improve its then-poor-quality dredging fleet in a bid to both meet growing domestic demand for deeper waterways and ports (expected to hit 5-7.5 billion cubic meters a year by 2015) and to secure a place in the rapidly growing global dredging market," the experts elaborated.

Soft Power in Action: Washington Would Love to See Regime Change in China
The experts stressed that 15 years ago China was not capable of constructing its widely discussed artificial islands in the South China Sea. This ambitious project required the use "of a large and impressive fleet of dredging ships." Therefore Beijing had made every effort to obtain such a fleet. Furthermore, it has focused on building larger and much more sophisticated dredgers than other countries. Eventually, Beijing has come out on top of the "dredging pyramid".

At the recent 48th ASEAN Foreign Minister's Meeting in Kuala Lumpur, Malaysia, China met with heavy criticism from its neighbors over the country's construction activity in the South China Sea.

The harshest criticism, however, came from US Secretary of State John Kerry, who hastened to point the finger at China for what he called restricting navigation and overflights in the region.

Remarkably, Western experts including Erickson and Bond remain silent about the fact that China is actually opposing the militarization of the region. According to Beijing, freedom of navigation and overflights does not include allowing foreign fighter jets and warships to violate other nations' security and sovereignty.

Beijing has repeatedly stressed that it praises freedom of navigation in the South China Sea since it facilitates economic development in the region.

In response to Beijing's critics, particularly Japan and the Philippines, China's foreign minister Wang Yi stressed that "[u]p to now, there has not been a single case in which freedom of navigation in the South China Sea has ben impeded."

"[T]he situation in the South China Sea is stable on the whole, and there is no possibility of major conflicts. China therefore objects to any non-constructive words or deeds that attempt to exaggerate the disagreements, hype up confrontation and heat up tensions, which do not conform to reality," Wang Yi pointed out in an official statement on August 6, 2015.

However, Erickson and Bond express their concerns regarding the rapid rise of China. The experts underscored that at the same time Beijing has been investing heavily in port construction and development "throughout Southeast and South Asia."

According to scholars, China has poured almost one billion dollars in to the construction of Kuantan port, Malaysia, opened a terminal in Colombo, Sri Lanka, and contributed significantly to the expansion of the port in Gwadar, Pakistan. China's fleet of dredgers is now helping to pave the Maritime Silk Road, they noted.

"In the short span of a decade, China has thus created and deployed a fleet that is literally altering geography and leveraging broad economic, industrial and technological development to advance China's geostrategic goals," Erickson and Bond emphasized.

Yuan Devaluation Attempt to Counter Weakening Euro, Yen - Think Tank
However, what is making the experts sweat bullets is that Beijing "could" potentially use its dredging fleet "to build an overseas naval base, or even simply to expand existing commercial ports to a large enough size to host a PLA Navy ship for replenishment, thereby increasing the PLA Navy's overseas capability."

Still, the scholars do not provide any evidence to justify their alarmist stance.

It should be noted that China's Defense Ministry has earlier warned Washington against "making irresponsible remarks" on the South China Sea issue and the so-called Chinese military "threat."