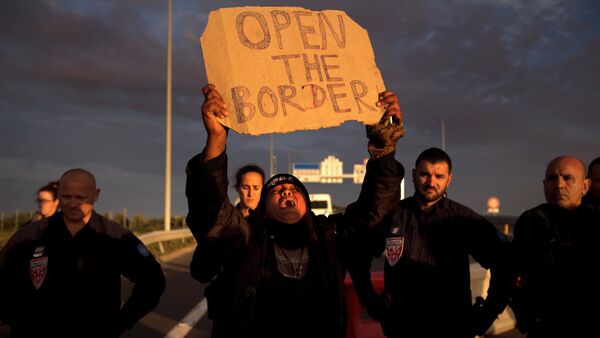 It's rather simple, Britain remains focused on stopping migrants camped out in Calais from entering the UK.

Aggressive policies coupled with militant rhetoric from the right-wing government are fast becoming a reactionary approach to the crisis, at the same time stoking fear among British people of what would happen if they, the migrants, did get in, whilst all the while forgetting to deal with why they, the migrants, want to reach the UK in the first place.

Thousands are camped out in Calais; many try night after night to cross the Channel Tunnel into England. Nine people have died in the process but last week a man successfully walked 31 miles through the Eurotunnel, risking being hit by trains speeding through at 100 miles per hour, only to be caught by the authorities at England's end.

But it's the fear of what happens to the people in the UK who have successfully made that journey, that the British mainstream press and politicians are stoking in their sticking plaster approach to the problem.

If migrants make a positive contribution to the UK economy, as we're constantly being told, why are we resisting their entry at #Calais?

The motivation behind why migrants might want to come to Britain — is misunderstood.

A new report by right-wing think tank Migration Watch UK suggests that "the main motivation to cross the Channel is not to seek asylum (France is a safe country) but the ambition is work illegally in Britain and send money home.

"Furthermore these migrants calculate, correctly, that they are very unlikely to be deported to their home countries."

Adding to the anti-asylum rhetoric from politicians and the UK Home Office that Britain is not "the land of milk and honey" and the "streets are not paved with gold" — Migration Watch is calling "to reverse the perception that, once across the Channel, these migrants are home and dry."

ah, I got it wrong. The UK —does- care about the plight of asylum seekers —as long as- they do not seek it in the UK pic.twitter.com/lpRc9E6XcR

Lord Green of Deddington, Chairman of Migration Watch, said: "Some of those in Calais may well have a case for asylum but they should be claiming in France which is, of course, a safe country. The real issue is about others who believe that, once they have crossed the Channel, they will be able to work illegally and send money home with very little risk of deportation.

"More security measures in France will not be sufficient. We need to change the perception that Britain is a 'soft touch'."

"That means arresting, detaining and, where possible, deporting those who have entered our country illegally," said Deddington.

How did this man become a Lord? #SMDH https://t.co/eUbdzr74zb

The report by Migration Watch UK is calling for: "A full search of trucks arriving in Dover; contingency planning for military aid to the civil authorities; detention in additional detention centres nearby for those migrants discovered in Dover; a 'one stop shop' to consider asylum claims and deport those whose claim fails; the introduction of ID cards in the UK and an expansion of the immigration detention estate."

The detention estate — which is referred to as "the black hole of the British justice system" is currently receiving wide condemnation from Peers, MPs, charities and aid organizations.

The UK is the only country in Europe to allow the indefinite detention of migrants. Recent Home Office figures reveal that 30,000 migrants are detained indefinitely — some having never committed a crime.

The group expressed shock by "the personal testimonies they heard of people suffering from mental health conditions who were detained for prolonged periods of time." The group said:

The Home Office has been accused of using the situation in Calais "as a cover for increasing poverty and suffering among families seeking safety from persecution," said Stephen Hale, Chief Executive of Refugee Action.

As for the migrants who manage to reach the light at the end of the tunnel, many may remain hidden. But for those seeking asylum, many hope to be found and granted refugee status; the raison d'être for beginning their journey in the first place towards the camp in France.