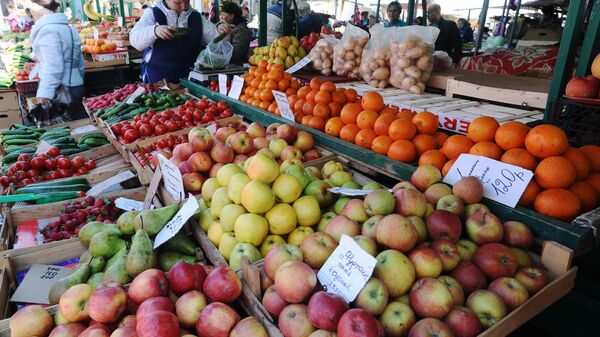 “A whole range of countries have been added beyond the countries from the European Union, Australia, Canada, Norway, and the United States, which were banned from exporting some types of foodstuffs to Russia. Those countries are Albania, Montenegro, Iceland, and Liechtenstein, as well as Ukraine under certain circumstances,” Medvedev said during a government meeting.

Medvedev explained that food export bans into Russia would go into effect if Kiev authorities engage the economical part of the EU Association Agreement signed in June 2014.

Russia
Russia Mulls Distributing Confiscated Food to Poor Amid Public Discontent
“In regard to Ukraine, the ban on exporting agricultural goods [into Russia] will go into effect only if the country’s government implements the economic part of the Association Agreement with the European Union, which Kiev signed in June of last year. We have decided to give until January 1 of next year to solve the economic situation, and after that date, if we cannot agree under the European Union’s mediation, and I don’t see any signs of that, these documents accepted earlier will go into effect and will set a normal trade regime and embargoes on foodstuffs for Ukraine. That’s our decision,” Medvedev said.

Moscow first introduced a ban on certain food imports in August 2014 in response to economic sanctions imposed by the Unites States, the European Union and their allies over Moscow's alleged participation in Ukraine crisis.

Russia has repeatedly denied any involvement in Ukraine's internal conflict and stated the language of sanctions was counterproductive and would have a negative effect on those who imposed them.