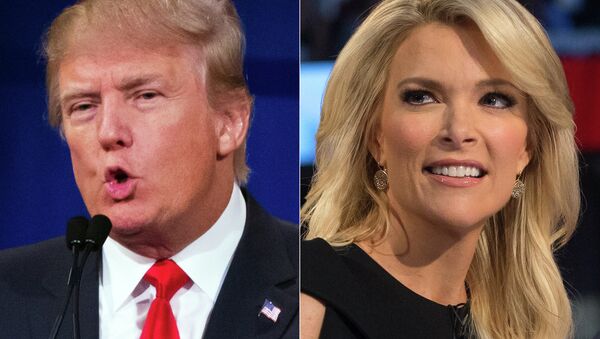 It’s becoming increasingly difficult to keep track of the offensive comments made by US presidential candidate Donald Trump. But while traditional logic suggests he would have alienated key demographics at this point, his poll numbers continue to rise.

Most recently, Trump’s sexist remarks about Megyn Kelly have had little effect on his approval with female voters.

During the Republican primary debate which aired last Thursday, Fox News moderator Megyn Kelly confronted Donald Trump with a difficult question. It was her job as moderator, after all, to raise concerns that may be shared by voters.

"You’ve called women you don’t like 'fat pigs,' 'dogs,' 'slobs,' and 'disgusting animals,'" Kelly began. "How will you answer the charge from Hillary Clinton, who is likely to be the Democratic nominee, that you are part of the war on women?"

Trump has since claimed that comment was misinterpreted, that whatever people initially thought he meant by "her wherever," he actually meant to say "nose."

It’s possible that the real estate mogul was, in fact, referring to Megyn Kelly’s nostrils. But it’s hard to give him the benefit of the doubt, given his prolific history of degrading women.

For the uninitiated, a partial rundown:

1.       "It must be a pretty picture, you dropping to your knees," Trump said to female contestant on an episode of Celebrity Apprentice.

2.       Described a female lawyer as "disgusting" for requesting a court break to pump breast milk for her newborn.

3.       "I don’t think Ivanka would do that [pose for Playboy]," he once said of his daughter. "Although she does have a nice figure. I’ve said if Ivanka weren’t my daughter, perhaps I’d be dating her."

There are many other examples, and presumably, these kinds of comments would lower Trump’s favorability among female voters. But remarkably, that does not appear to be the case.

"I like how disgusted he is in how things are right now," 34-year-old Kelly Ray told Reuters. "I’m not fed up with Donald Trump. I’m fed with Barack Obama."

She’s not alone. While Trump’s female support has fallen slightly, down to 20% from 26%, it’s still a far less dramatic plunge than many expected.

A pair of conservative video bloggers have even earned a name for themselves by defending the billionaire on YouTube. Nicknamed the "Stump for Trump Girls," Lynette "Diamond" Hardaway and Rochelle "Silk" Richardson have not only supported his Megyn Kelly comments, but lambasted Kelly for even daring to ask the question.

"Maybe it’s time for us to file Kelly and make her go back to reporting news at the local news, try Sesame Street," Hardaway says in one video. "Maybe you should go back and report news for Sesame Street and have a debate with them."

"We have people going into movie theaters shooting it up, Don," Hardaway said during a CNN interview. "We’ve got to secure this border. We have to make America great again, and the only way that we can do that is with Donald Trump."

Hardaway and Richardson have also published a video defending Bill Cosby against over two dozen allegations of sexual assault.

On Monday, Kelly said she would not apologize to Trump and stood by the merits of her question.

"Apparently, Mr. Trump thought the question I asked was unfair, and felt I was attacking him," she said during her Fox News program, The Kelly File. "I felt he was asked a tough but fair question. We agree to disagree."

It may be slowing down, but the Trump train has so far proven remarkably resistant to derailment.