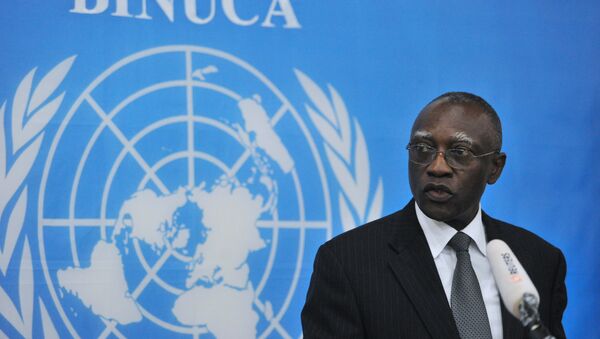 The UN Secretary General has dismissed the head of the agency’s peacekeeping mission in Central African Republic in the wake of numerous sex abuse allegations against peacekeeping troops.

UN Dismisses Peacekeeper For Blowing the Whistle on Child Rape in Africa
Ban Ki-moon announced the resignation of Babacar Gaye, 64, and pledged to take action on the "outrageous and indecent actions of a few people," the Guardian reported.

"I cannot put into words how anguished, angered and ashamed I am by recurrent reports over the years of sexual exploitation and abuse by UN forces," Ban said.

Amnesty International alleged that UN peacekeepers earlier this month killed a 16-year-old boy and his father and raped a 12-year-old girl in Bangui in two separate incidents.

They're just the newest blows against the UN mission in CAR, after it was accused of mishandling child sexual abuse allegations against French soldiers and its own peacekeepers. Ban called in June for an independent inquiry into those allegations, the results of which are expected to be revealed soon.

The secretary general slammed what he called the  "systematic problem" of sexual exploitation. Addressing sexual abuse victims, Ban emphasized: "I want victims to know that we will strive to uphold our institutional responsibility to safeguard their security and dignity."

"When the United Nations deploys peacekeepers," Ban said, "we do so to protect the world's most vulnerable people in the world's most desperate places. I will not tolerate any action that causes people to replace trust with fear.

"Those who work for the United Nations must uphold our highest ideals. Yet the outrageous and indecent actions of a few people tarnishes the heroic work of tens of thousands of UN peacekeepers and personnel."

Joanne Mariner, Amnesty International's senior crisis response adviser, said she supports the UN head's actions, and stressed that an investigation must be launched immediately into the allegations of sex abuse.

"These allegations of rape and indiscriminate killing committed by UN troops are supported by physical evidence and multiple witness accounts," Mariner said. "There must be a prompt and thorough investigation by a competent civilian authority and the girl must receive full support including medical and psychological care."

Amnesty reports the 12-year-old victim had been hiding in a bathroom during a house search on August 2 when a man allegedly wearing the blue helmet and vest of the peacekeeping forces raped her.

"When I cried, he slapped me hard and put his hand over my mouth," the girl was quoted as saying by Amnesty.

An internal UN report entitled "Sexual Abuse on Children by International Armed Forces" was leaked to and published by the Guardian newspaper in April.

It included the allegations that boys were sexually abused by French troops, who were deployed in CAR — a former French colony  - in 2013 to stop violence between Muslim Seleka rebels and Christian militias.

UNSG: "Enough is enough. Today I hav accepted resignation of my special representative Mr Babacar Gaye", head of the @UN_CAR #sabcnews

France began withdrawing its troops from the country after an 8,500-strong UN peacekeeping mission was deployed to CAR in 2014.

According to the UN Secretary General, the heads of all currently active peacekeeping missions will be gathered for an emergency special meeting on Thursday to remind them of their responsibilities to "report allegations immediately, investigate thoroughly and act decisively."

The list of allegations against UN peacekeeping troops continues to grow.  In June the Associated Press obtained an internal UN report that said more than 200 women were sexually abused by peacekeepers deployed in Haiti.