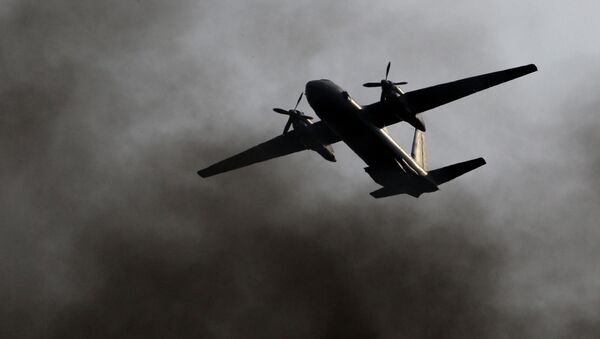 © Sputnik / Vitaliy Ankov
/
Go to the photo bank
Subscribe
The German tabloid Bild has been alarmed with pictures from the recent Russian naval aviation military exercises featuring bombs attached to Antonov An-26 military transport aircraft with WWII era-slogans such as “To Berlin!” and “For Stalin”.

The Germans got in a flap at the inscriptions on the modern air bombs, which were attached to Antonov An-26 military transport aircraft which participated in the bomb-dropping exercises for the first time in the last 20 years. 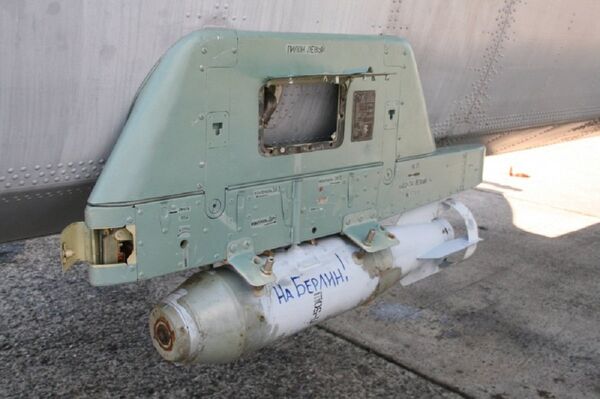 Two of the bombs attached to military transport aircraft Antonov An-26, had the inscriptions “To Berlin!” and “For Stalin!”,similar to those used during the Second World War by the Soviet Red Army in its fight against Nazi Germany.
© Photo : http://flot.com/

Two of the bombs had inscriptions which read “To Berlin!” and “For Stalin!”; these rallying cries were originally used during the Second World War by the Soviet Red Army in its fight against Nazi Germany. 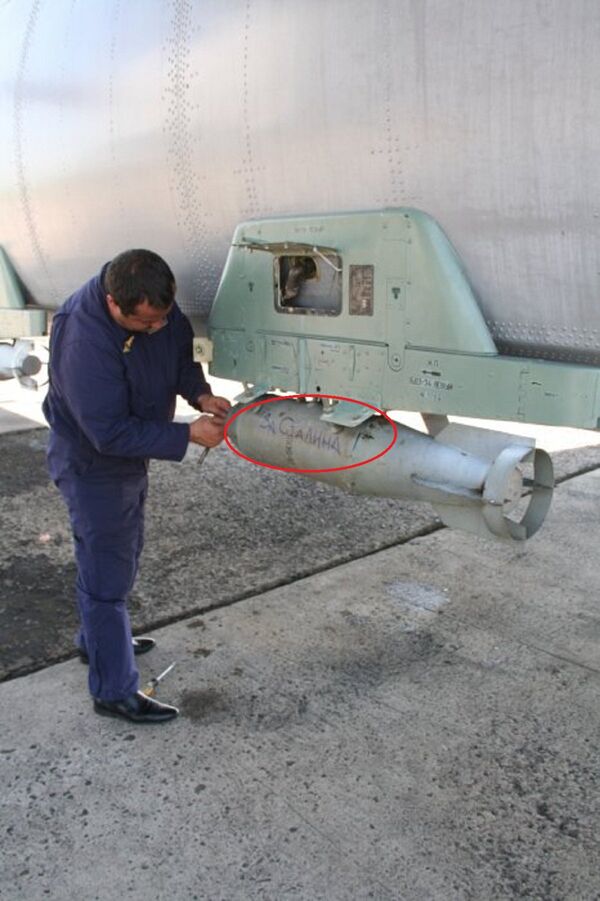 Two of the bombs attached to military transport aircraft Antonov An-26, had the inscriptions “To Berlin!” and “For Stalin!”,similar to those used during the Second World War by the Soviet Red Army in its fight against Nazi Germany.
© Photo : http://flot.com/

What made the situation even more peculiar is that the military exercises were staged a mere 500 kilometers away from the German capital.

The German tabloid was quick to interpret the pictures as “either a hoax” of a “Putin-trained Luftwaffe”, or a “bitter insight into the Russian reality of 2015”.

“The bomb slogans such as 'To Berlin!' and 'For Stalin!' are more than pure nostalgia, but showing dangerous tendencies in the Russian leadership and army,” it wrote.

Later in the day, an anonymous source in the Russian Defense Ministry commented on the posted pictures, calling them “either someone’s stupidity, or a photomontage, or a desire to play with some anti-Russian sentiment,” according to the Russian news agency Interfax.

He added that “neither while being stored in warehouses, nor, moreover, during any training or otherwise exercises had any inscriptions whatsoever been put on any ammunition”.

He also said that no German journalists have ever been present at the latest naval aviation military exercises.

The pictures were apparently made during missile-firing and bombing exercises at shooting ranges in Russia’s westernmost Kaliningrad Region in early August. 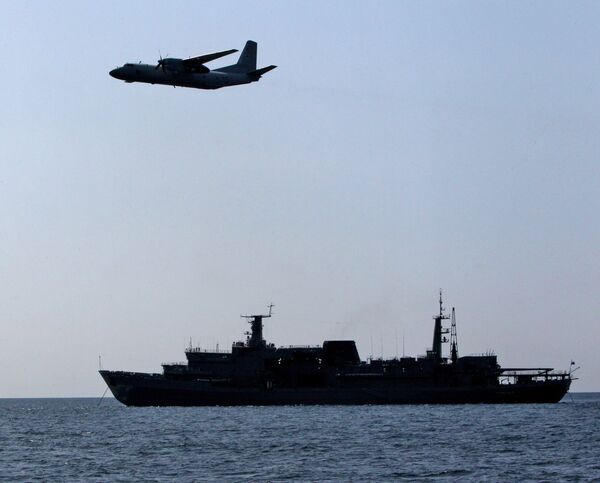 000000
Popular comments
Germans still owe some 15-20 milion lifes to Ruskies: Remember: in ww2 around 27 milion Russians lost their life and only 10 milion Germans. Now, if the ww3 is about to begin the Germans ought to be aware that it is going to be the "pay day, baby". Bowing to Americans may be too costly for Germans. One is for sure: Russia is not unprepared now as it was back in 1941 !!!
vladimir_matic
14 August 2015, 12:17 GMT
000000
The Germans started this in 6/22/41, so they aren't the threat they were in the 30's they should be scared, they know they ain't ready for no confrontation with Russia, but since they are aligned with their US handlers they ask for it. Also don't forget on one bomb, "For Stalingrad."
ewilli1983
18 August 2015, 10:20 GMT
000000
Newsfeed
0
New firstOld first
loader
LIVE
Заголовок открываемого материала
Access to the chat has been blocked for violating the rules . You will be able to participate again through:∞. If you do not agree with the blocking, please use the feedback form
The discussion is closed. You can participate in the discussion within 24 hours after the publication of the article.
To participate in the discussion
log in or register
loader
Chats
Заголовок открываемого материала
Worldwide
InternationalEnglishEnglishMundoEspañolSpanish
Europe
DeutschlandDeutschGermanFranceFrançaisFrenchΕλλάδαΕλληνικάGreekItaliaItalianoItalianČeská republikaČeštinaCzechPolskaPolskiPolishСрбиjаСрпскиSerbianLatvijaLatviešuLatvianLietuvaLietuviųLithuanianMoldovaMoldoveneascăMoldavianБеларусьБеларускiBelarusian
Transcaucasia
ԱրմենիաՀայերենArmenianАҧсныАҧсышәалаAbkhazХуссар ИрыстонИронауОssetianსაქართველოქართულიGeorgianAzərbaycanАzərbaycancaAzerbaijani
Middle East
Sputnik عربيArabicArabicTürkiyeTürkçeTurkishSputnik ایرانPersianPersianSputnik افغانستانDariDari
Central Asia
ҚазақстанҚазақ тіліKazakhКыргызстанКыргызчаKyrgyzOʻzbekistonЎзбекчаUzbekТоҷикистонТоҷикӣTajik
East & Southeast Asia
Việt NamTiếng ViệtVietnamese日本日本語Japanese俄罗斯卫星通讯社中文（简体）Chinese (simplified)俄罗斯卫星通讯社中文（繁体）Chinese (traditional)
South America
BrasilPortuguêsPortuguese
NewsfeedBreaking
15:08 GMTParis Being Rocked by Protests Against COVID-19 Passes for 10th Weekend in Row
14:31 GMTNotre-Dame Restorers Finish Fortification Works to Start Restoration Phase
14:19 GMTWhen Trump Asked Obama About His 'Biggest Mistake', POTUS 44 'Couldn't Think of Anything': Book
14:05 GMTFrance 'Raises Game' on Migrant Interceptions After UK Threatens to Scrap Funding to Paris
14:00 GMTFour British Ex-PMs Snub Johnson's Chequers Centenary Banquet
13:58 GMTAir Defence Strengthened in Northern Ukraine as Part of Exercises With NATO, Air Command Says
13:54 GMTSenior Dies From Self-Inflicted Wounds at Medics' Protest in Warsaw
13:53 GMTGuinean Military Says Ousted President Conde to Remain in Country
13:30 GMTElon Musk Says Future SpaceX Ships Will Have Food Warmers After Inspiration4 Mentions Cold Pizza
13:22 GMTEx-Sec of State Pompeo, NSA O'Brien Knew Nothing About Gen. Milley's Secret Talks With China: Report
13:13 GMTParisians Protest Against COVID-19 Health Pass, Mandatory Vaccinations
13:03 GMTLive Updates: Trump Supporters Gather for 'Justice for J6' Rally Near US Capitol
13:03 GMTK-Pop Sensation BTS Turns Celebrity Diplomats, Will Represent South Korea at the UN General Assembly
12:59 GMTPolice Scrap Request for 100 Armed National Guardsmen to Tackle Pro-Capitol Riot Rally
12:16 GMTFrench Ambassador Accuses Australia of Betrayal Before Leaving for Paris
12:10 GMT'Why Would US Ensure Our Defence?' France Urges EU to Boost 'Strategic Autonomy' Amid AUKUS Fallout
12:03 GMTDonald Trump Called North Korean Leader Kim Jong-un 'F**king Lunatic', New Book Claims
11:55 GMTVideo: Protesters in Greece Burn US, NATO Flags as Alliance Holds Annual Meeting
11:44 GMTTroy Deeney on Ronaldo's 'Magic Diet': 'If I Saw Him Eating Horsesh*t... I'd Eat That Too!'
11:39 GMTPentagon Warns Europe of Russia Posing Bigger Security Threat Than China