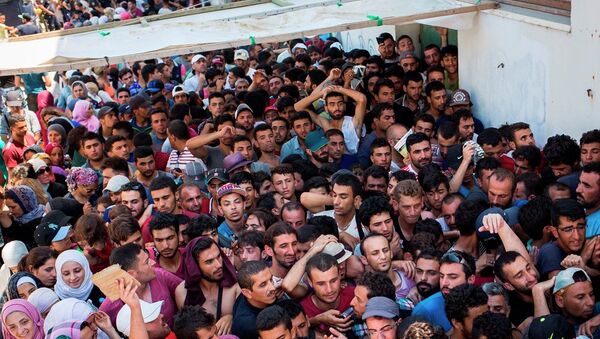 © AP Photo / Alexander Zemlianichenko
Subscribe
While the Greek parliament fights over the final demands from the Troika, violence has erupted amongst migrants and the police on the holiday island of Kos, which is crippling under the number of asylum seekers and refugees arriving on its shore.

Shocked tourists looked on as riot police used fire extinguishers and batons to control over a thousand  migrants who had gathered in a long queue by a stadium waiting to register with the Greek authorities.

Migrants chanted "we want papers, we want to eat" as hundreds of other desperate refugees blocked the main coastal road by staging a sit-in.

The mayor of Kos, George Hazimarkos admitted: "Any and every semblance of public order has evaporated. The situation is out of control and if protests continue, they may lead to bloodshed".

More than 7,000 refugees, asylum seekers and migrants have arrived on Kos in the last month. The majority of them are put up in tents in parks or sleep rough on the streets.

But it’s since emerged more than 1,000 migrants have been locked in a gravel stadium on the edge of the town with no hygiene facilities, no shade and no shelter, with reports people were fainting every fifteen minutes.

State of Inaction — State of Abuse

"What was previously a situation of state inaction is now one of state abuse, with police using increasing heavy handed force against these vulnerable people," says Brice de le Vingne, Médecins Sans Frontières (MSF) and Doctors Without Borders Director of Operations.

The UN Refugee Agency has also called on the Greek authorities, "to urgently designate a single body to coordinate response and set up a humanitarian assistance mechanism".

Greece has seen a 750 percent rise in the number of migrants arriving, at a time when the country’s economy is on its knees and awaiting further bailout loans from Europe. Prime Minister Alexis Tsipras has already admitted: “It is beyond what we can handle”. Brice de le Vingne says:

"Eight months after MSF’s first call for the Greek authorities to organize decent and humane reception in the islands of the Dodecanese, specifically on the island of Kos, we are appalled to see that the Greek state has failed to do so."

Tensions are also increasing on other Greek islands, where more than 120,000 refugees have arrived since the start of the year.

Athens has said it will send a specially chartered vessel to ferry more than 4,000 migrants to the mainland to ease the crisis on Kos and extra administrative personnel will be sent to speed up the registration process for migrants.

But as the numbers of migrants arriving in Greece rapidly increase – as does the urgency for the country’s economic bailout program to be agreed to help the country fend off both an economic and refugee crisis.