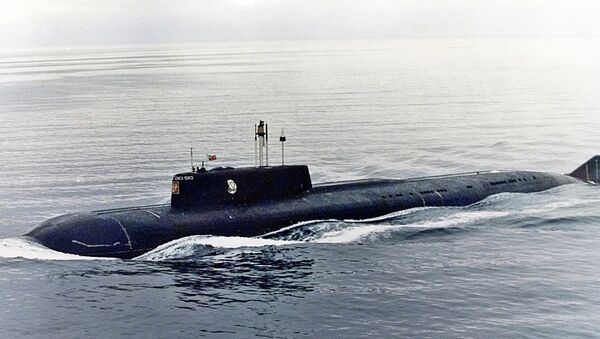 © AP Photo / STRINGER
Subscribe
International
India
Africa
On Wednesday, cities across Russia and the fleets of the Russian Navy held ceremonies commemorating the 118 sailors who died when Russian nuclear submarine Kursk sank in the Barents Sea 15 years ago, on August 12, 2000.

Science & Tech
Russian Social Media Reacts to Polish Game About Kursk Submarine Tragedy
The Kursk, one of Russia's largest and most advanced cruise missile submarines, was crippled and sank following an explosion of one of its onboard torpedoes during a naval exercise.

The catastrophe of the sinking itself turned into a national tragedy after it was discovered that some of the sailors had survived the initial explosion, and had spent their last days at the bottom of the sea floor hoping to be rescued.

The Russian Navy made several attempts to rescue the sailors, after finding the vessel a day after its sinking. Over the course of the next four days, the Navy made repeated attempts to attach diving bells and submersibles to the sub's escape hatch, without success. On August 19 Norwegian ships came to assist the rescue operation, and on August 21 Norwegian divers managed to open one of the hatches, finding all the sailors to have perished.

Russia
Putin to Talk About Most Dramatic Moments of His 15 Years in Power
In the aftermath of the disaster, investigators found a letter in the pocket of an officer confirming that at least 23 of the sailors had survived the initial explosion which crippled the vessel and sent it to the bottom of the sea.

Commemorations in the Murmansk Region included a liturgy by Russian Orthodox Church Metropolitan Simon of Murmansk and Monchegorsk at a local regimental church at Ara, along with a ceremony at Vidyayevo, the port from which the submarine had left, never to return home again. People will also gather at the local memorial to "Submariners Who Perished at Sea", where a requiem will be held, and wreaths and flowers will be laid.

A minute of silence was declared at 11:28 am Moscow time among Russia's western fleets, the exact moment, 15 years ago, when the torpedo explosion rocked the Kursk. Ships of the Northern and Black Sea fleets, flying their flags at half-mast, rang their sirens.

Kursk - Anniversary of the Barents Sea Disaster
In the south-western Russian city of Kursk, where 12 of the sailors are buried, flowers will be laid before their graves. In St. Petersburg, home to the largest number of the dead, relatives and friends, veterans and representatives of the Russian Navy will come to the St. Nicholas Naval Cathedral for a memorial service.

On Wednesday, Igor Permyakov, the head of the Central Archive of the Defense Ministry, told Russia's RIA Novosti that the complete details of the Kursk's sinking will be made available in 2030, when all remaining classified information is declassified. Permyakov noted that this may occur earlier, if the Russian government chooses to do so.