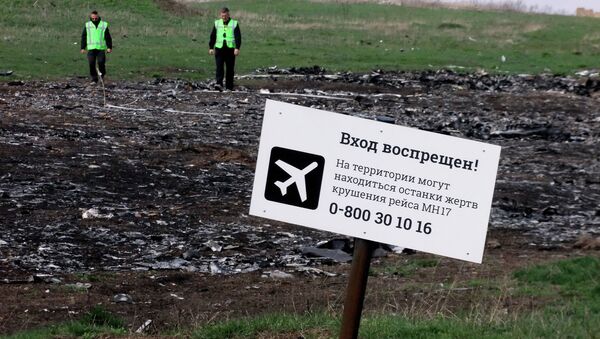 © Sputnik / Igor Maslov
/
Go to the photo bank
Subscribe
It is too early to hypothesize about the country of origin of possible missile system parts amid the ongoing probe into last year’s downing of Malaysia Airlines Flight MH17, a spokesman for the Joint Investigation Team (JIT) said Tuesday.

Expert Team on MH17 Crash Investigates Possible Buk Missile Parts
MOSCOW (Sputnik) – International prosecutors said earlier that they were investigating debris of "particular interest" recovered from the airliner’s crash site in southeast Ukraine. The debris in question is thought to possibly have originated from a Buk surface-to-air missile system.

"It’s still under investigation whether these are parts of a Buk missile system or not. So it’s too early to draw any conclusion," JIT spokesman Wim de Bruin told RT in an interview.

Media reports suggested that the debris, secured during a recovery mission, belonged to a Russian-made missile.

In a previous statement, the JIT said it was investigating the origin of the discovered parts to shed light on the possible cause of the MH17 crash, but said the direct connection between the parts and the crash has not yet been established.

The Amsterdam-Kuala Lumpur flight MH17 was brought down on July 17, 2014 over the Donetsk countryside, killing all 298 people on board.

Ukrainian government forces and independence militias accuse each other of shooting down the Boeing 777 aircraft.

In June, Russian arms manufacturer Almaz-Antey published the results of its inquiry into the crash, showing that flight MH17 was downed by a guided missile launched by a Buk-M1 system. The particular missile has not been produced in Russia since 1999, but remains in service in the Ukrainian Army, according to the manufacturer.

000000
Popular comments
Neil McGowan, and the logic in that is?
will.bov
12 August 2015, 02:11 GMT1
000000
There is more evidence to suggest it was shot down by a buk missile system than a ukrainian fighter. However this is still not clear evidence of who did it. What worries me is that Russia has continued to hamper the progress made by the international community into investigating the crash. They even went as far as vetoeing a draft resolution to set up an international tribunal. Why would they do this unless they had something to hide? After the crash rebels blocked all access to the crash site, they wouldn't let any OSCE members near the plane. Again why would they do this unless they where trying to cover something up? Only the guilty would try to cover up the truth and hamper the investigation.
will.bov
12 August 2015, 02:29 GMT1
000000
Newsfeed
0
New firstOld first
loader
LIVE
Заголовок открываемого материала
Access to the chat has been blocked for violating the rules . You will be able to participate again through:∞. If you do not agree with the blocking, please use the feedback form
The discussion is closed. You can participate in the discussion within 24 hours after the publication of the article.
To participate in the discussion
log in or register
loader
Chats
Заголовок открываемого материала
Worldwide
InternationalEnglishEnglishMundoEspañolSpanish
Europe
DeutschlandDeutschGermanFranceFrançaisFrenchΕλλάδαΕλληνικάGreekItaliaItalianoItalianČeská republikaČeštinaCzechPolskaPolskiPolishСрбиjаСрпскиSerbianLatvijaLatviešuLatvianLietuvaLietuviųLithuanianMoldovaMoldoveneascăMoldavianБеларусьБеларускiBelarusian
Transcaucasia
ԱրմենիաՀայերենArmenianАҧсныАҧсышәалаAbkhazХуссар ИрыстонИронауОssetianსაქართველოქართულიGeorgianAzərbaycanАzərbaycancaAzerbaijani
Middle East
Sputnik عربيArabicArabicTürkiyeTürkçeTurkishSputnik ایرانPersianPersianSputnik افغانستانDariDari
Central Asia
ҚазақстанҚазақ тіліKazakhКыргызстанКыргызчаKyrgyzOʻzbekistonЎзбекчаUzbekТоҷикистонТоҷикӣTajik
East & Southeast Asia
Việt NamTiếng ViệtVietnamese日本日本語Japanese俄罗斯卫星通讯社中文（简体）Chinese (simplified)俄罗斯卫星通讯社中文（繁体）Chinese (traditional)
South America
BrasilPortuguêsPortuguese
NewsfeedBreaking
03:00 GMTWreckage of Disappeared An-26 Plane Found in Russia's Khabarovsk Territory - Source
02:20 GMTLavrov Holds 1st Meeting With Truss in New York Amid New UK Accusations Under Skripal Case
01:49 GMTDHS Looks to Staff Gitmo Migrant Facility With Guards Who Speak Haitian Creole Amid US Border Surge
01:30 GMTRussian Crew Leaves Boat Pilgrim in Alaska, Will Renew World Trip Next Spring - Captain
01:00 GMTWall Street Up Broadly as Fed Signals Caution With US Stimulus Taper, Rate Hike
00:45 GMT‘This Moment Demands Action’: Biden Eyes Executive Actions After Fruitless Police Reform Talks
00:26 GMTMoroccan Liberal Parties Form Coalition Government, Ousting Islamists After Decade of Rule
00:00 GMTIAEA Must Have Access to Nuclear Fuel for Australian Submarines - Iranian Envoy
YesterdayFDA Authorizes Pfizer Booster Shots for Elderly, At-Risk Americans
YesterdayTurkey Should Withdraw From Syria, End Occupation of Territories - Syrian Foreign Minister
YesterdayPentagon Says Aware of Reports of Poor Conditions at Military Base Housing Afghans
YesterdayUK Announces Plans to Become AI Innovation Superpower Within 10 Years
YesterdayUS Man Pleads Not Guilty to Capitol Bomb Threat After Livestreaming Police Standoff
YesterdayCroatian Police Partially Solve Mystery of Lone Woman Found on Island With No Memory
Yesterday‘Earth Looks Fragile from Space:’ Jeff Bezos Pledges $1 Billion to Tackle Climate Crisis
Yesterday‘World’s Coolest Dictator’: El Salvador’s Bukele Changes Branding on Twitter Amid Protests
YesterdayCzech, Hungarian Prime Ministers Slam EU for Poor Border Protection From Illegal Migrants
Yesterday‘We’re Done With Fear’: Florida Appoints Joseph Ladapo as State’s New Surgeon General
Yesterday'Difficult Decision': Facebook Chief Technology Officer to Step Down From Post
YesterdayGrandmothers Know Best: Cristiano Ronaldo’s Mother Believes Her Grandson is a Star in the Making