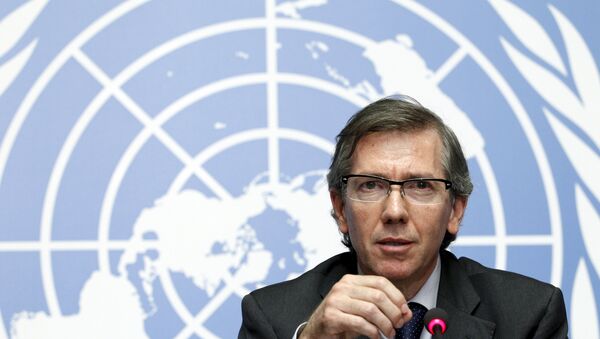 © REUTERS / Pierre Albouy
Subscribe
International
India
Africa
UN's Special Representative and head of its support mission in Libya said that a deal on peace settlement in Libya and the establishment of a national unity government may be signed in early September.

Africa
Libya Pro-Gaddafi Supporters Hold Fledgling Rally in Benghazi
GENEVA (Sputnik) – A peace settlement deal in Libya and the establishment of a national unity government may be signed in early September, UN's Special Representative and head of its support mission in Libya (UNSMIL) said Tuesday.

"We are proposing for the parties to work in the coming three weeks to try to have agreement on these important two points… by the end of August," Bernardino Leon told reporters.

The UNSMIL chief expressed confidence that if the two issues – the annexes to a comprehensive deal and the establishment of a unity government – are agreed on, the documents may be signed early next month.

"This very much will depend on the political will and on the creativity, on the wisdom, of the parties to bring good names, good proposals to the table," he stressed.

Leon noted that the UN was encouraged by the participation of all Libyan parties to the conflict in current negotiations. He later added that the date and location of renewed ceasefire talks would be determined at the conclusion of the ongoing meeting in the Austrian capital of Geneva on Wednesday.

Mohammad Ammari, member of Libya’s General National Congress legislature, confirmed to RIA Novosti earlier in the day that a national unity government may be established by September.

Libya has been in a state of turmoil since 2011, when an Arab Spring uprising led to a civil war and the overthrow of long-time leader Muammar Gaddafi. There are currently two rival governments, one of which is not recognized internationally, operating in the country.