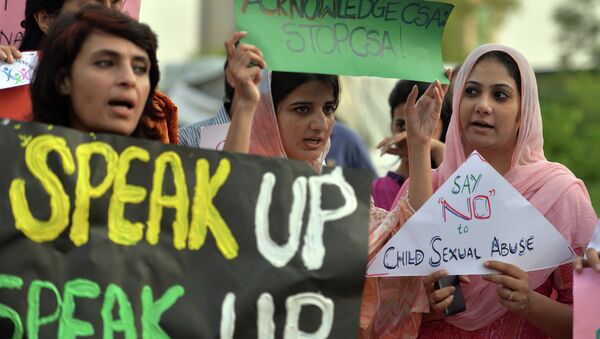 © AFP 2021 / Aamir QURESHI
Subscribe
Police in Punjab province have been accused of failing to do enough to stop multiple child abuse cases that residents say are connected to a prominent family in Husain Khan Wala.

Google Lists Pakistan as Top Porn-Seeker
Villagers say they’ve been trying to get the authorities to investigate multiple reports of minors — mostly boys — being forced to perform sex acts on video, which was then sold or used as blackmail against the children’s impoverished families, Reuters reported.

Along with human rights organizations, they’re demanding a thorough examination into the allegations and a clear condemnation from the state. If the investigation confirms the abuse, it could impact the Punjabi provincial government, headed by the brother of Pakistani Prime Minister Nawaz Sharif.

Shakila Bibi says the authorities refused to take her complaints seriously, and rather than protecting her 15-year-old son, they imprisoned him.

“I went to the police station to file a complaint,” she told Reuters, “but instead of registering a (report), they took my son into custody.”

Another mother, Rubina Bibi, said she was thrown out of the police station when she tried to file a report.

“My son is in the videos, he is a victim,” she said. “Our children were forced into this. They were humiliated. But the police are treating them like criminals.”

Anonymous Hacktivist Group Now Gunning for Powerful Pedophile Networks
Police have arrested seven suspects so far, though they have downplayed the scale of abuse, suggesting the accusations may have been motivated by a land dispute. But many residents have retained lawyers and are pressing ahead.

“I have personally met hundreds of parents who have not yet come forward to file official complaints, either out of fear or shame,” Latif Sra, an attorney representing some of the victims, told Reuters.

“It’s a very murky situation,” Babar said. “I assure you … there will be a fair and very transparent investigation,” he added.

Ghulam Abbas, the head of the police investigation unit in Kasur, said some of the videos obtained by law enforcement show several children consenting to sex with the suspects.

“We have recovered video clips from mobile phones confiscated from the accused, and have also confiscated memory cards and computers from the house allegedly used by the rapists,” Abbas said, according to Newsweek Pakistan.

000000
Popular comments
It appears that these pedophile groups are becoming more popular among the elite. It appears that future trends indicate that we should all be concerned for all our children