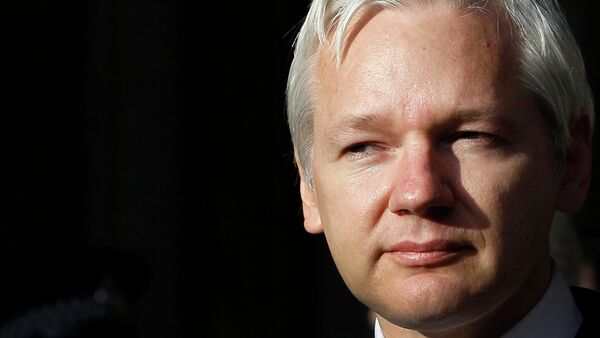 WikiLeaks spokesman claims that Sweden’s standoff with Ecuador over the interrogation of WikiLeaks founder Julian Assange is "bizarre" in light of revelations that London permitted Stockholm to question others on its soil.

MOSCOW (Sputnik), Daria Chernyshova – Sweden’s standoff with Ecuador over the interrogation of WikiLeaks founder Julian Assange is "bizarre" in light of revelations that London permitted Stockholm to question others on its soil, the website’s spokesman told Sputnik on Monday.

A Freedom of Information (FOI) request revealed that the United Kingdom granted Swedish authorities permission to carry out at least 44 interviews of witnesses or suspects on its territory since 2010.

Ecuador Denies Asking Sweden to Grant Assange Asylum
WikiLeaks spokesman Kristinn Hrafnsson reiterated Assange’s longstanding willingness to be questioned inside the Ecuador embassy in London, where he has avoided extradition since 2012.

He claims that the Swedish authorities refused to consider such an option until recently. Swedish prosecutors relented in March, asking Assange’s legal representatives if he would consent to being interviewed in the embassy.

"Now we learn that at the same time Swedish authorities interviewed 44 witnesses and suspects in London in other cases. So it is quite bizarre," Hrafnsson stressed.

The Embassy of Ecuador in the United Kingdom denied earlier reports by Swedish justice officials that Quito had demanded that Stockholm grant Assange asylum before permitting its authorities to interrogate him on sexual assault allegations.

The Swedish official, Cecilia Riddselius, said their side interpreted Ecuador’s request to sign a bilateral judicial cooperation agreement as a demand to recognize Assange as an asylum seeker.

The WikiLeaks spokesman claimed that the hand-wringing between the two nations is feeding into the ongoing impasse.

"The case has reached the stage where it could have been finalized and moved forward a long time ago," Hrafnsson told Sputnik.

The statute of limitations on three of the allegations of sexual assault against Assange expire next week, while the rape allegation remains in force until 2020.

The 44-year-old Australian national continues to deny the accusations and claims the extradition attempts are aimed at ultimately sending him to the United States, where he is likely to face espionage charges for leaking top-secret military documents and diplomatic cables.