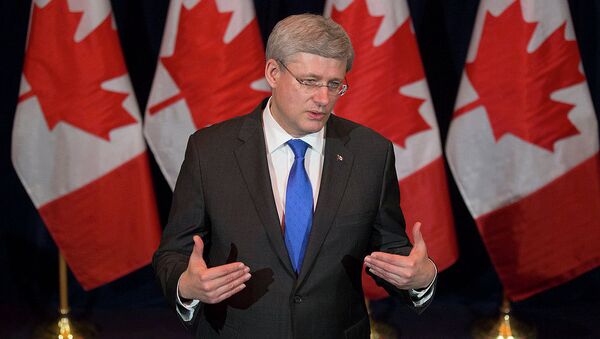 Canadian Prime Minister Stephen Harper announced that government unveiled an initiative to support minorities in the Middle East who are being threatened by the Islamic State.

Over 20 Militants Killed in ISIL Assault on Military Airbase in Syria
WASHINGTON (Sputnik) – Canada’s government unveiled an initiative to support minorities in the Middle East who are being threatened by the Islamic State, Canadian Prime Minister Stephen Harper announced via Twitter on Monday.

The three-year initiative, according to a release Harper provided a link to, would help protect religious minorities, including Alawites, Bedouins, Christians, Druze, Shia, Yazidis and others, who are threatened by the “genocidal terrorist organization” called the Islamic State.

Ottawa’s program, the release added, will protect places of worship and religious artifacts in addition to accepting 10,000 refugees who are facing religious persecution in the Middle East.

The Islamic State seeks to destroy sacred places of worship as part of its mission to establish an Islamic caliphate, the release explained.

“Canada will work with the global community to ensure that places of worship and cultural heritage are preserved,” the release noted.

The release also claimed that Canadian politicians Justin Trudeau and Thomas Mulcair have made “excuses for jihadi terrorism and have publicly stated that they would end Canada’s mission to combat ISIS [Islamic State] and protect religious minorities.”

The Islamic State has attacked religious shrines and executed minorities in Iraq and Syria, where the extremist militant group has seized a significant amount of territory and declared a caliphate under Sharia law.

Smuggling artifacts from occupied territories is a major source of income for the Islamic State, according to UNESCO.