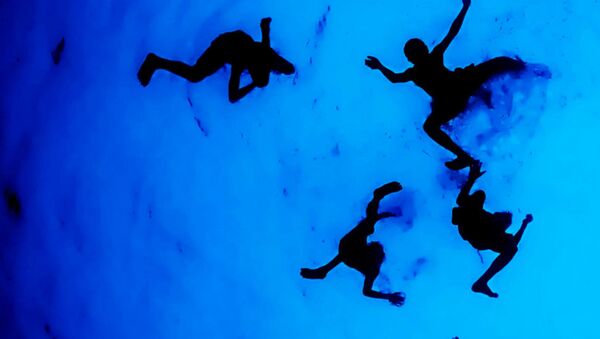 © Flickr / Jan Messersmith
Subscribe
Greece is not just swamped by an economic crisis - but a refugee one as well. The number of migrants arriving to the country has soared by 750 percent.

Fifty thousand people seeking asylum arrived in July alone — a time when waters are more favorable and forgiving towards the rickety fishing vessels and rubber dinghies used by desperate migrants to cross the Mediterranean.

According to Vincent Cochetel, Director of the Bureau for Europe for the United Nations Refugee Agency:

"This humanitarian emergency is happening in Europe, and requires an urgent Greek and European response. Such a level of suffering should and can be avoided. The Greek authorities need to urgently designate a single body to coordinate response and set up an adequate humanitarian assistance mechanism."

But while Greece offers emergency assistance and support — the UN Refugee Agency has called on the Greek authorities — "To urgently designate a single body to coordinate response and set up an adequate humanitarian assistance mechanism." 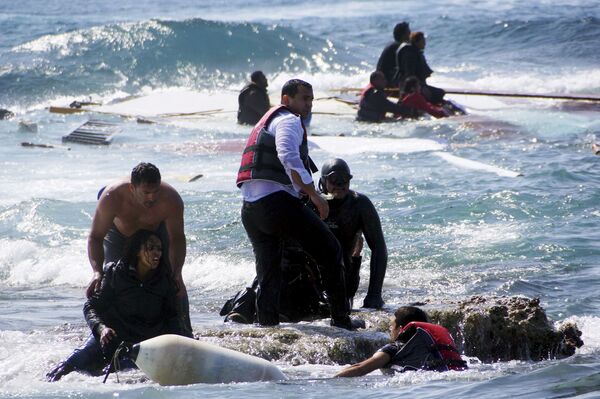 Migrants, who are trying to reach Greece, are rescued by members of the Greek Coast guard and locals near the coast of the southeastern island of Rhodes April 20, 2015.
© REUTERS / Argiris Mantikos/Eurokinissi

But it can't be ignored that the Mediterranean country is just about keeping its economic head above water. The Greek economy is in recession, the country is on the cusp of securing a bailout from the European Union — in return for more austere living conditions, all the while the number of migrants arriving on its shores swells — by 750 percent.

"The generous response of Greek civil society, in a difficult context, should be recognized and supported," said the UN Refugee Agency.

Meanwhile, Greek Prime Minister Alexis Tsipras has admitted: "It is beyond what we can handle," and has hit out at 'The West'.

The majority of migrants arriving on Greek shores are from Syria, Afghanistan and Iraq. The number of migrants fleeing Syria shot up by 70 percent in July. Tsipras said:

The contrast in EU solidarity is clear in images of tourists basking in the sunshine while migrants are brought to shore on rubber dinghies by rescuers. 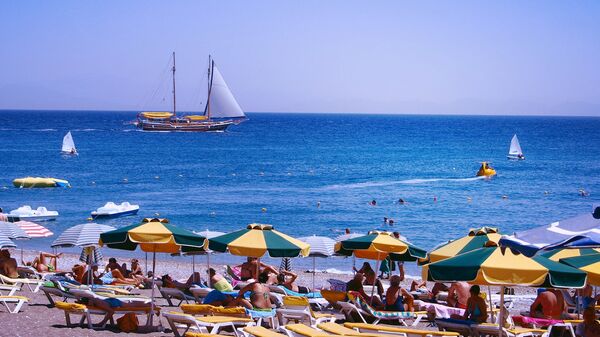 Many of the migrants are staying on the holiday islands of Lesvos, Samon and Kos. But the challenge for Greece doesn't end there. "More efforts are needed to ease access to the asylum procedure; only 6,200 have applied for asylum as of end of June," says the UN Refugee Agency.

And with equally challenging rhetoric, Alexis Tsipras responded by saying:

"It is not possible for host countries to be warehouses of human lives, nor can the Mediterranean become a sea-cemetery."

Already dubbed 'The Mediterranean Graveyard' — the Organization for Migration says there have been 2,000 drownings this year.

On the issue of migration, Tsipras says: "The EU serves no purpose if it will be a Union of individual states where each serves its own interests. It will be a Union with no prospects and future."

Desperate to secure the economic prospects and future for the Greek people, Tsipras' Syriza government and the creditors, otherwise known as the Troika, remain in talks on how much bailout money Greece needs — and will be granted. It's expected the talks will come to an end on Tuesday, 11 August.

But it's going to get worse for Greece — before it gets better.

The country must secure $94.22 billion (€86bn) from its creditors to be able to pay off its debt to the European Central Bank on August 20. The cost to the country, or the concessions — include more spending cuts, public sector reforms and privatization.

My statement regarding how to best manage the refugee flows to #Greece #imigration #refugeesGr http://t.co/h7jg4l0OlU

As the numbers of migrants arriving in Greece rapidly increase — so does the urgency for an agreement on the country's economic bailout program. The "issue of Greece is already testing the EU. In my view, the outcome regarding the economic crisis was negative. I hope that the EU will response positively to this important humanitarian issue and act with solidarity," said Alexis Tsipras.

000000
Newsfeed
0
New firstOld first
loader
LIVE
Заголовок открываемого материала
Access to the chat has been blocked for violating the rules . You will be able to participate again through:∞. If you do not agree with the blocking, please use the feedback form
The discussion is closed. You can participate in the discussion within 24 hours after the publication of the article.
To participate in the discussion
log in or register
loader
Chats
Заголовок открываемого материала
Worldwide
InternationalEnglishEnglishMundoEspañolSpanish
Europe
DeutschlandDeutschGermanFranceFrançaisFrenchΕλλάδαΕλληνικάGreekItaliaItalianoItalianČeská republikaČeštinaCzechPolskaPolskiPolishСрбиjаСрпскиSerbianLatvijaLatviešuLatvianLietuvaLietuviųLithuanianMoldovaMoldoveneascăMoldavianБеларусьБеларускiBelarusian
Transcaucasia
ԱրմենիաՀայերենArmenianАҧсныАҧсышәалаAbkhazХуссар ИрыстонИронауОssetianსაქართველოქართულიGeorgianAzərbaycanАzərbaycancaAzerbaijani
Middle East
Sputnik عربيArabicArabicTürkiyeTürkçeTurkishSputnik ایرانPersianPersianSputnik افغانستانDariDari
Central Asia
ҚазақстанҚазақ тіліKazakhКыргызстанКыргызчаKyrgyzOʻzbekistonЎзбекчаUzbekТоҷикистонТоҷикӣTajik
East & Southeast Asia
Việt NamTiếng ViệtVietnamese日本日本語Japanese俄罗斯卫星通讯社中文（简体）Chinese (simplified)俄罗斯卫星通讯社中文（繁体）Chinese (traditional)
South America
BrasilPortuguêsPortuguese
NewsfeedBreaking
06:13 GMTGerman Chancellor Candidates in Focus as Tough Coalition Talks Loom
05:53 GMTBrexit to Blame: Germany's Olaf Scholz Says 'End to Freedom of Movement' Fueled UK Petrol Crisis
05:37 GMTUK Motorist Runs Over Knife-Wielding Man Amid Alleged Petrol Dispute - Video
05:23 GMTPatriarchy Strikes Back? Iceland's Historic Female-Majority Parliament Up in Smoke After Recount
04:43 GMTUS Marine Colonel Put in Brig For ‘Asking for Accountability’ Over US Departure From Afghanistan
04:03 GMTWitness Who Claims She Saw Prince Andrew Dancing With Giuffre at Club to Testify in Court - Report
03:24 GMTBennett Claims He Said 'No Three Times’ to President Biden During Their August Meeting
03:16 GMTRepublicans Slam DHS Chief Mayorkas for Allowing Thousands of Haitians Into US
01:37 GMTUS ‘Humiliated Like Never Before’, Trump Says, After DHS Allowed Thousands of Migrants to Pour in
01:31 GMTLockheed Martin to Build US Army’s Next Generation Tactical Vehicle Based System
01:10 GMTBorder Patrol Agents Disgruntled Over Biden's Attempts to Throw Them 'Under the Bus' - Report
00:53 GMTBeard-Check: Afghan Barbers Banned From Shaving, Trimming Beards - Reports
00:27 GMTR. Kelly Found Guilty: Will Artist Be Removed From Music Services?
00:03 GMTIs Sir Alex Ferguson Right, That Ronaldo, and not Messi, Could Score a Hat-trick for Anyone?
00:00 GMTUS Senator Menendez Urges New Sanctions on Turkey if It Acquires More Russian Weapons
YesterdayInsurgents Who Detained President of Guinea Declare Transitional Charter - Reports
YesterdayTexas Lawmakers Propose New Congressional Districts in Cities of Austin, Houston
YesterdayIOM Looking for Alternatives for Haitians at US Border, Brazil Being 1 Option - Sources
YesterdayCzech Republic Will Purchase Israeli-Made Air Defenses to Replace Soviet Gear
YesterdaySPD Leader Scholz Says Yet to Hear Congratulations From CDU/CSU Rival