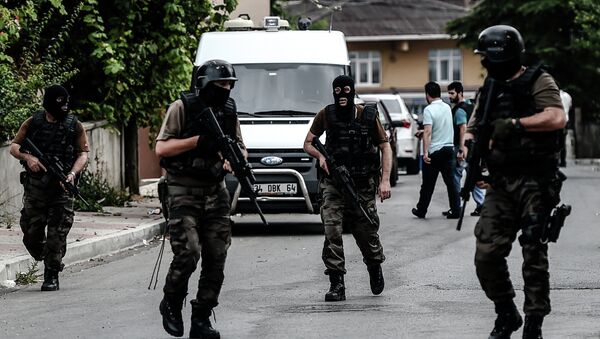 Turkish police killed two attackers in a shootout that followed an explosion at a police station in Istanbul's Sultanbeyli district earlier on Monday, local media reported.

Southeast Turkey Kurdish Militant Attack Kills Police Officer - Reports
MOSCOW (Sputnik) – Earlier in the day, a man detonated a car bomb near the Sultanbeyli district police station. According to the Daily Sabah newspaper, another assailant opened fire at police officers at the scene of the blast.

One police officer was killed in the shootout, according to local media.

The police station bomb attack injured 10 people, including seven civilians. The blast caused a fire in the building and damaged neighboring houses.

Also on Monday, two unidentified gunmen, a man and a woman, opened fire at a US diplomatic mission in the northernmost district of Istanbul.

The incidents come a day after the United States deployed six F-16 fighter jets to the southern Turkish base of Incirlik to conduct airstrikes against the Islamic State (ISIL) jihadist group in neighboring Syria.