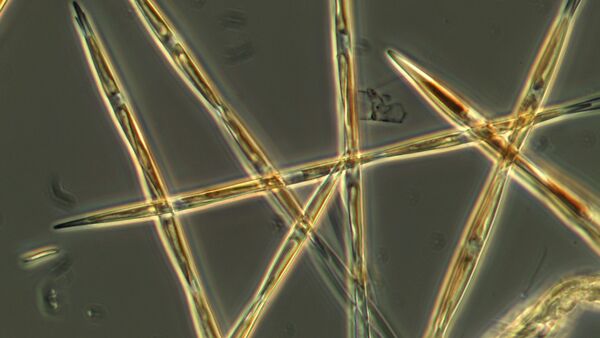 © AP Photo / NOAA Fisheries
Subscribe
An unprecedented bloom of toxic algae that spreads thousands of miles across the Pacific Coast of the United States and Canada is raising concerns for health and massive economic loss through the closing of fisheries.

The massive algae bloom emerged in May and spans from the Channel Islands off the coast of Southern California to Alaska's Aleutian Islands.

"It's just lurking there," said Vera Trainer, research oceanographer with the Northwest Fisheries Science Center in Washington State, talking to Reuters. "It's the longest lasting, highest toxicity and densest bloom that we've ever seen."

Scientists Spot 'Largest-Ever' Toxic Algae Bloom Off US West Coast
The bloom produces a profusion of demoic acid, a chemical compound that accumulates in shellfish, sardines, and anchovies. It also works like a neurotoxin on higher marine life such as sea lions.

According to the National Oceanic and Atmospheric Administration, contaminated seafood can cause amnesic shellfish poisoning in humans which can lead to short-term memory loss, brain damage, and death.

Last month, Washington state was awarded an $88,000 grant to analyze the bloom which already has prompted fishery closures.

According to the NOAA, the closure of a Washington State clam fishery cost $9.2 million in lost income and damaged the state’s $84 million commercial crabbing industry.

Oceanographers are studying whether climate change among several other factors could be contributing to the bloom of pseudo-nitzschia algae. Researchers believe it was partially spawned by unusually warm water along the West Coast. Trainer said scientists are also concerned about the El Nino effect, a recurring phenomenon that alters sea currents and temperatures.