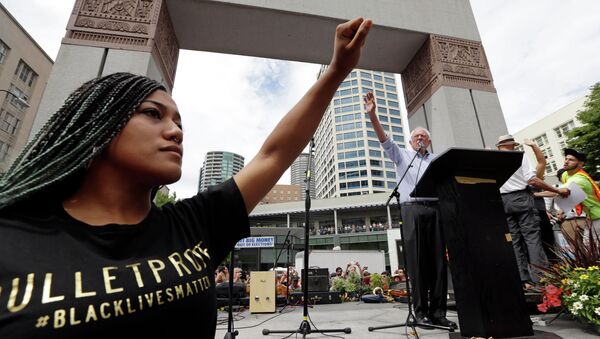 Bernie Sanders was forced to cancel his Saturday afternoon speech at Westlake Park in Seattle after being disrupted by activists from the group Black Lives Matter.

Two women took control of presidential candidate Bernie Sanders’ microphone just as he was about to address a crowd of several thousand people.

And the Big Winner of the GOP Presidential Debate? Bernie Sanders
Organizers at the Westlake Park rally which was held to commemorate the anniversary of Social Security, Medicare and Medicaid allowed the women to speak for two minutes after failing to convince them to wait. For the next 20 minutes, the activists spoke about several points including the death of Michael Brown, a teenager who was fatally shot by a police officer in August.

They also led the crowd in a four-minute moment of silence. However, when some attendees asked them to let Sanders speak, one activist called the crowd “white supremacist liberals.”

When Sanders tried to take back the microphone, he was pushed back. The presidential candidate then said goodbye, delivered a raised right-fist salute, and proceeded into the crowd where he posed for pictures with supporters for about 15 minutes before leaving.

Racial tension and the threat of white supremacy are at the heart of the Black Lives Matter movement. Its founder Alicia Garza said, “We completely expect those who benefit directly and improperly from white supremacy to try and erase our existence.”

Curtains for Clinton? Majority of Democrats Happy With Sanders as Nominee
During the ‘70s and early ‘80s, the Black Liberation Movement operated as a militant group within the United States dedicated to engaging in an “armed struggle” for the liberation and self-determination of black people in the U.S.

Sanders’ history, however, indicates a less radical approach to ease racial tensions. While in school, he was active in the Student Nonviolent Coordinating Committee and joined the March on Washington, which led to the iconic “I have a dream” speech by Martin Luther King Jr. in 1963.

After leaving the Westlake Park rally Saturday afternoon, Sanders delivered a speech at the University of Washington. He addressed several topics including criminal justice reform and income inequality.

"No president will fight harder to end institutional racism and reform criminal justice system," Sanders said before the crowd at the Hec Edmundson pavilion, according to the King5-TV station. "Too many lives have been destroyed by war on drugs, by incarceration; we need to educate people. We need to put people to work."