China’s Space Exploration Potential Has US Chasing Its Own Tail 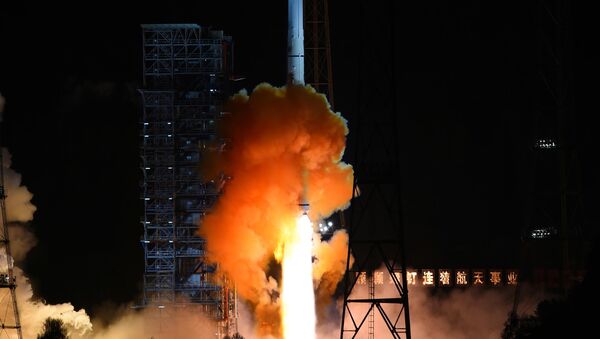 © AP Photo / Xinhua, Jiang Hongjing
Subscribe
During the seventh round of US-China Strategic and Economic Dialogue meetings in June 2015 there was a discussion on space exploration.

The short paragraph read, “101. Space: The United States and China decided to establish regular bilateral government-to-government consultations on civil space cooperation. The first US-China Civil Space Cooperation Dialogue is to take place in China before the end of October Separate from the Civil Space Cooperation Dialogue, the two sides also decided to have exchanges on space security matters under the framework of the US-China Security Dialogue before the next meeting of the Security Dialogue.”

Pentagon Plans Space-War Center to Defend Against Adversaries Russia, China
The above statement gives rise to speculation, given that other agencies of the US government that deal with space, specifically NASA and the White House Office of Science and Technology Policy (OSTP), have been legislatively banned from using federal funds “to develop, design, plan, promulgate, implement or execute a bilateral policy, program, order, or contract of any kind to participate, collaborate, or coordinate bilaterally in any way with China or any Chinese-owned company” since 2011, writes Joan Johnson-Freese for The Diplomat.

The ban was also understood to mean that NASA could not host “official Chinese visitors” at NASA facilities. Hence, the statement asks why one part of the US government would consider dialogue with Chinese officials regarding space important and useful, while another wants to give China the silent treatment.

China Creates High-Sensitive Electric 'Eye' to Revolutionize Space Docking
Back in 2011 NASA’s ban on working with China on space exploration was the brainchild of Representative Frank Wolf chair of the House Appropriations Commerce-Justice-Science (CJS) subcommittee. Referring to China as an “evil empire” in 1999, Congressman Wolf did not trust Chinese scientists working for NASA and carefully scrutinized them throughout his tenure.

But such caution proved problematic. When NASA’s Ames Research Center excluded Chinese scientists from a conference, American scientists consequently boycotted the conference in protest, forcing Wolf to penalize Ames for applying the bilateral ban to a multilateral conference, and NASA was left to apologize.

Likewise, while the US has tried hard not to cooperate with China on space related projects, other nations showed that they were eager to work with and sell to China.
There are risks in the space environment which stem from congestion (the US owns more than 40 percent of the satellites in orbit), space debris, naturally occurring space objects, and debris potentially created by anti-satellite (ASAT) weapons.

In recognition of its inability to deal with the space debris issues on its own, the US realizes that it needs to work with China and 11 other countries on the Inter-Agency Space Debris Coordinating Committee (IADC).

With China making steady progress in space exploration, one example being China’s July 2014 missile defense test, which has been of particular concern to the US may have perhaps convinced the State Department that it was time to step in and pursue dialogue with China.