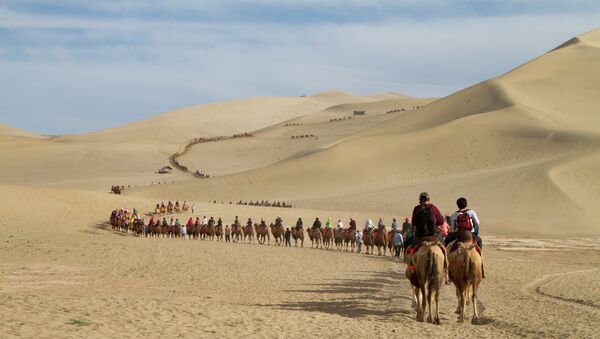 © Flickr / Martha de Jong-Lantink
Subscribe
Referring to the China-led "One Belt and One Road" initiative, experts often mean the development of the Eurasian region, while Beijing's bold project goes far beyond the Eurasian continent.

Beijing's initiative is aimed at bringing together not only the states of the Eurasian continent but also Eastern Africa and the Arabian Peninsula, as well as the South Pacific nations (most notably Australia and New Zealand) and even Latin America.

The World is Not Enough: Egypt's New Suez Canal Conjoins Chinese Silk Road
In other words, China's "Silk Road spirit" is meant to establish close ties between all continents.

But as noted by Japanese journalist Hirotake Maeda in the 19th century, the goal of constructing railways in this region was to equip the routes on which the natural resources of the Black Sea and Caspian Sea could be delivered via the Black Sea to Europe and around the world.

Nevertheless, the Caucasus region was at the center of trade flows in Eurasia well before the railways. An important role was played back then by the rural roads, which passed through the south of Russia.

History shows that the relationship between China, Eurasia and the Black Sea region began a long time ago.

The route was opened up by Zhang Qian in the Western Han Dynasty from 139 BC to 129 BC and the routes were gradually formed throughout the Han Dynasty. With the establishment of the Tang Dynasty and the great prosperity of that time, the road flourished and reached its apex.

According to Japanese journalist Hirotake Maeda, the history of the “Silk Road” was made into a documentary over 30 years ago.

In one of the parts of the program there was an entire segment dedicated to the Caucasus region. They showed footage of the ‘Dead city’ in South Ossetia, the Georgian Military Road, the Vardzia cave monastery complex in Southern Georgia, Azerbaijan Sheki and Baku, as well as the monastery of Echmiadzin in Armenia.

Eurasian Heartland: Silk Road and EEU to Solidify Sino-Russian Relations
According to the information provided in the show the old “Silk Road” went through the 1,100 kilometer wall of the Caucasus Mountains. But in fact the route of the Silk Road went straight into the Black Sea connecting with the Crimean route.

In the 6th century the road passed along the northern coast of the Caspian Sea, to avoid the high taxes imposed by the Sasanian dynasty which ruled over the region.
Silk was discovered in the ‘Moshchevaya Balka’ located in the North-West Caucasus. The Chinese upon discovering the secret of how to make silk carefully guarded this secret in order to maintain the monopoly on silk production.