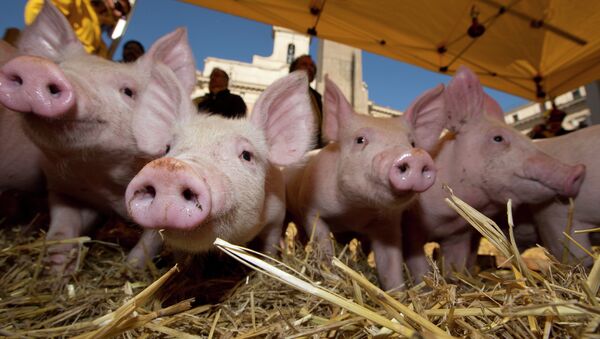 French pig farmers estimated that due to the Russian embargo that led to the oversupply in the EU food market the pig producing industry alone lost almost a billion euros, news radio station France Info reported.

A similar pattern can be seen in other areas of the French agricultural industry, the source said.

Last August, Russia issued a one-year ban on the import of food from the EU, the United States and some other Western countries in response to anti-Russian sanctions imposed against it over the Ukrainian crisis.

French Gov’t Aid to Farmers Insufficient As 'Big Crisis' Looming - NGO
At that time, Russia was the EU's second-biggest market for food exports. The list of products includes meat, poultry, fish, seafood, dairy products, fruit and vegetables. In June, following the EU's decision to extend sanctions against Russia, Moscow decided to respond in the same fashion, extending the food embargo for another year.

Since the EU cannot import its farming produce to Russia, its food market has become oversupplied, causing a dramatic fall in food prices. This, in turn, is hurting European farmers, who need high food prices to make a living and keep their businesses afloat.

The Russian embargo leads to massive losses in the livestock breeding industry overall. And French pig farmers aren't the exception.

"French pig farmers are losing €0.2 euros from each pig carcass over the past year and a half, which has already accumulated to more than €800 million euros in losses," said Paul Auffray, President of the French National Federation of Pork Producers, as cited by France Info.

In the past, Russia would purchase French farming products at a higher price than France now has to export. With the Russian market out of reach now, the EU deals with less lucrative markets in Algeria and the UAE, the French radio station said.