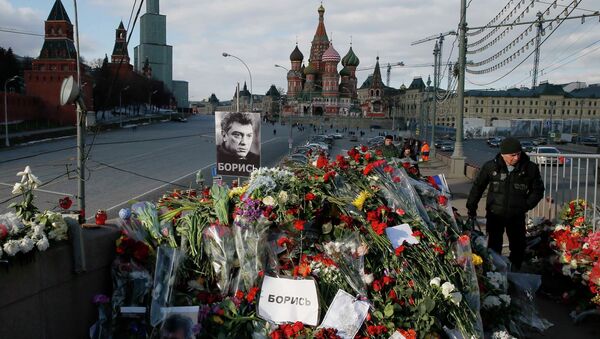 The medical examination for the murder of Russian opposition politician Boris Nemtsov has shown he could have been shot from two different pistols, newspaper Kommersant reported Saturday.

Test Finds No Traces Linking Nemtsov Murder Suspects to Case – Defense
MOSCOW, August 8 (Sputnik) — Nemtsov, who occupied a number of senior positions in the Russian government in the 1990s, and went into opposition in the 2000s, was fatally shot in central Moscow on the night of February 27.

"Having examined the characteristics of the wounds in the politician's body, they [medical examiners] concluded that the injuries could have been made from two different guns," Kommersant said.

Five persons were detained on suspicion of involvement in the murder and put under arrest a week after the tragedy, with the main suspect being Zaur Dadaev. The investigation is currently underway.

"Mr Nemtsov could have received three injuries from a pistol that had a silencer (as originally reported by Zaur Dadaev) and the rest from the weapons which did not have a silencer," Kommersant said.

On Friday, another suspect in the murder has been found. Ruslan Muhadinov was found to be the person who used the car in Moscow from which Nemtsov had been shot and killed.

On Thursday, a lawyer for one of the suspects said that the forensic examination has not revealed proof that suspects in the murder were present in the car that was documented as being used by the killers.