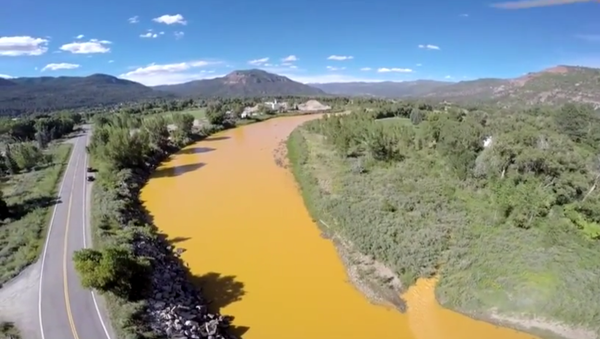 Parts of the Aminas river in southeastern Colorado turned completely orange after a US Environmental Protection Agency crew investigating contamination at a nearby goldmine accidentally dumped over a million of gallons of toxic wastewater into a tributary creek on Wednesday.

Eureka! It's Climate Change!
Agency officials admitted their crew was responsible for the Aminas river pollution, which unfolded when wastewater from the out-of-service Gold King Mine was accidentally emptied into Cement creek during a cleanup operation.

The EPA cleanup crew was trying to examine pollutants at the mine site north of the city of Silverton. They used heavy machines that reportedly damaged a barrier that was keeping the waste from spilling into waterways.

"We are very sorry for what happened,” Dave Ostrander, the EPA’s Region 8 director of emergency preparedness, told the Denver Post. “This is a huge tragedy. It's hard being on the other side of this. Typically we respond to emergencies, we don't cause them…. It's something we sincerely regret."

According to the EPA, the mine was filled with water that contained various levels of lead, arsenic, cadmium, aluminum, copper and calcium, among other elements. Contaminated water moved downstream since the accident, and while the Agency said that adverse effects on wildlife would be minimal, but the Center for Biological Diversity (CBD) opposed that position.

"Endangered species downstream of this spill are already afflicted by [the] same toxic compounds like mercury and selenium that may be in this waste," CBD's Taylor McKinnon claimed. “EPA's downplaying of potential impacts is troubling and raises deeper questions about the thoroughness of its mine-reclamation efforts.”

Agency administrator Shaun McGrath said they weren’t prepared for the disaster, and may have underestimated the initial level of contamination.

"We weren't anticipating impacts downstream,” he told the Denver Post. “As a result, the messages you may have heard the first day were not appropriate…Unfortunately our early comments may have sounded cavalier for the public health and wildlife.”

EPA coordinator Hayes Griswold said that the river’s Ph level is higher than usual, but that it isn’t deadly, according to the Post. The river is now closed to fishers, swimmers, and kayakers, and withdrawal of river water for any purpose is prohibited.

Right now on the #AnimasRiver in #Durango. Currently monitoring fish in the river — some results may be known today. pic.twitter.com/tHk876ldLg

Durango is making national news now for a mine waste spill in the #AnimasRiver: http://t.co/0qZD8f4U31 pic.twitter.com/9o9q2DpNjE

Meanwhile, local authorities as well as residents of nearby towns are quite concerned about the possible impacts of the spill on human health.

"The EPA caused it. And the EPA has taken the 'lead role,'” State Senator Ellen Roberts said. “The problem is the EPA has left us totally disarmed. The biggest problem now is public health and safety."