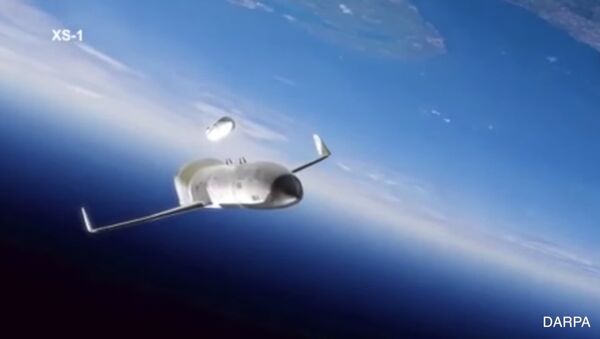 © Photo : Youtube/SpaceTeeVee
Subscribe
International
India
Africa
The US aerospace giant Boeing has signed a contract with the US government to design a spaceplane, the XS-1, for the fast delivery of satellites into orbit, reports Defense Blog.

US military strategists fully expect that in any future conflicts between the major world powers, Earth’s orbit will become a new battlefield.

The country that can recover fastest from the initial orbital massacre will dominate space, the ultimate high ground in any high-tech battle.

“In an era of declining budgets and adversaries’ evolving capabilities, quick, affordable, and routine access to space is increasingly critical for both national and economic security,” DARPA stated in a press release.

Science & Tech
NASA Selects 4 Astronauts for Initial US Commercial Spaceflights
The new spaceplane XS-1 is designed to boost a two-ton satellite into space every day for 10 days straight for less than $5 million per flight.

Conceptually, the robotic XS-1 is basically just a high- and fast-flying drone that can lend a single-stage rocket speed and altitude, making it easier for the rocket to escape Earth’s gravity.

Russian air defense and aerospace defense can effectively track and destroy targets in near-Earth space. If the MiG-31 interceptor or S-400/500 anti-aircraft missile system can hit a satellite in orbit, the new spaceplane would also be an easy target for them.