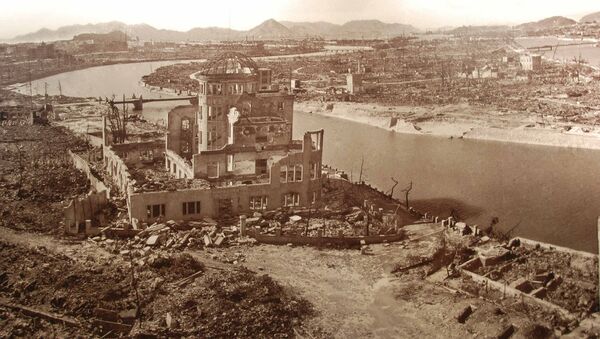 Andrew Korybko
All materials
The magazine Foreign Policy’s provocative article makes it seem like the nuclear bombings were a godsend, and that the US humanely intended to save Japan from communism.

The month of August is somberly commemorated as the only time in the world when nuclear weapons were used in warfare, where the US dropped two bombs that killed over 200,000 people in two fatal moments: one on August 6 over Hiroshima, and yet again three days later over Nagasaki.

US Believes Bombings of Hiroshima, Nagasaki Justified – Chinese Professor
For 70 years, this occasion has been marked by respect for the many victims who tragically lost their lives during these attacks, but now an influential American international affairs outlet, Foreign Policy, has decided to spin the event, blaming the Soviet Union for what happened.

In the article “Did Hiroshima Save Japan From Soviet Occupation?”, Sergey Radchenko questions whether the nuclear bombings were actually good for the country, in that they may have saved it from Western bogeyman Joseph Stalin.

This callous inference is contradicted by the article’s own conclusion, but nonetheless, it’s worthwhile to examine why the magazine would find it fitting to denigrate the victims’ memory in the first place with such a misleading and politically self-serving angle.

The US isn’t known for issuing international apologies, and in the exceptionally rare instance that it does (like during Obama’s 2009 trip to Egypt), it often does so to further the goal of strategically disarming a target population before an asymmetrical offensive against their country (such as the Arab Spring Color Revolutions).

As a general rule of thumb, no matter what it does, the US is always seeking to promote its own interests, be it by hard or soft means.

Things get a bit more complicated when it comes to non-state American actors such as Foreign Policy, but here, they have a lot more flexibility in honing the US’ strategic message while retaining plausible deniability that such an attempt is free from ulterior motives.

Be that as it may, it’s clear what Foreign Policy is trying to express on behalf of the State Department – the nuclear bombings may have been justified in order to “save Japan from Soviet occupation”.

WWII 'Did Not Justify' Hiroshima, Nagasaki Atomic Bombings by US
Sure, they ultimately (and correctly) conclude that Stalin’s decision to refrain from attacking Imperial Japan in Hokkaido had nothing whatsoever to do with Hiroshima and Nagasaki, but in today’s non-stop media-driven environment, the average information consumer probably didn’t get to that point since they likely only read the headline and maybe the two-sentence lead-in.

Supposing that’s the case with most people, the simple message they understood was that there was a connection between the two, and that maybe, as the article intimates, the nuclear bombings were perhaps justified after all, and they and all other Americans could feel absolved of any guilt for the tragedy.

What’s worse, however, is the lingering thought suggested by the headline and lead-in that the nuclear bombings of Hiroshima and Nagasaki actually helped Japan in some perverse type of way.

A democratic-proselytizing US saying that “I nuked you to save you” to Imperial Japan is almost like a religiously-oriented sexual predator saying “I raped you to change you” to a lesbian.

One side sees the other as existentially incompatible with its beliefs and in need of forced salvation, and horribly takes it upon itself to commit a gruesomely horrendous crime in order to ‘save’ the victim.

Shades of War: Hiroshima and Nagasaki Then and Now
Don’t read too deep into the analogy, but do understand that in both cases, criminal, moralistic paternalism is the driving force behind each outrageous wrongdoing, except in the case of Japan’s nuclear victimhood, over 200,000 people were immediately violated and perished within an instant, unable to ever confront their attacker and demand justice. And, as Foreign Policy would have its readers believe, this might have been in the name of the greater good.

Another takeaway from the article is the overarching anti-Soviet fearmongering that the author is peddling. If one wasn’t all that educated about the last days of World War II and only had the Foreign Policy article in question to guide their understanding, they’d be forgiven for thinking that the US was essentially at war with the Soviets and nuked Japan as a last-ditch and ‘successful’ measure to stem the ‘red tide’ from flowing further eastward.

It makes it seem like the USSR was the one on the cusp of an unforgettable war crime and not the US, and that the latter simply acted to save Japan from whatever the former was plotting. This kind of conspiracy circulation is pure and simple historical revisionism, and it serves mostly to deflect attention away from the US’ nuclear bombings and more towards the stereotypical intrigue that surrounds Stalin, their new World War II scapegoat, in the carefully cultivated imagination of the Western public.

Every fifth and tenth commemoration of a certain major event is typically remembered with extra pomp and circumstance, and the 70th anniversary of the US nuclear attacks on Japan is no different.

What has changed in the past 14 five-year cycles, however, is that the US is now engaged in a New Cold War with Russia, one which, unlike its predecessor, has no established limits and even incorporates historical revisionism. Be it the ridiculous talk by some voices that the Soviet Union ‘occupied’ Ukraine after World War II or the presently discussed insinuation that the US “saved Japan from Soviet occupation” by nuking it twice, such uncomfortable changes in the historical discourse have become ever more common over nearly the past two years.

What’s really disturbing, however, is how readily they’re being accepted by the West, which frighteningly opens up the possibility for a full-scale historical revisionism of the post-World War II era and the fact that unquestioned objectivity will be laid to waste in the pursuit of political subjectivity.

Atomic ‘Hibakusha’: 70 Years in the Life of Hiroshima Survivor
That in and of itself is bad enough, but what should also be mentioned is that this particular stunt is part and parcel of the US’ Pivot to Asia. As Washington shifts its strategic focus more to East and Southeast Asia, it’s not only bringing its military, but also its journalists’ interpretations of history.

One of the effects that this may have is a long-term transformation of the Japanese consciousness to the point where the country’s citizens no longer understand the proper and objective context in which the US’ atrocious actions were committed. Instead, Japanese students might one day be indoctrinated with the false idea that the US nuked their country in order to “save Japan from Soviet occupation”, thus making the bombings a historical ‘godsend’ and the US its accompanying ‘savior’.

After all, the US is prepping for a prolonged global rivalry with Russia, and in this context, it’s assured that they’ll resort to whatever means necessary to sully its reputation and stave off a Russian-Japanese resolution of the Kuril Islands dispute to offset Russia’s redirection to the east. Despite whatever the US government or its friendly media outlets allege, however, there’s no taking away from the fact that the US’ nuclear bombings of Hiroshima and Nagasaki are the main reason why Japan is still occupied to this day, albeit by the Pentagon and not the Kremlin.