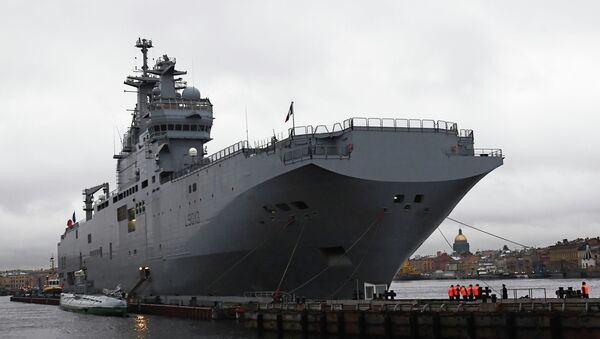 The $1.3 billion deal was officially terminated on Wednesday. Paris is reported to have already transferred some 1.1 billion euros ($1.2 billion) to a Russian bank as a compensation for the non-delivery of two Mistral-class helicopter carriers.

"We [France] managed to close the door on the entire Russian defense market, potential Eldorado, and all in order to please US and European "allies." Due to the cancellation of the Mistral contract, a strategic partnership with Russia collapsed," Migault said.

'Scandalous' Mistral Non-Delivery: Hollande Chooses to Be 'Good US Friend'
DCNS, the company that built the Mistrals, was hoping to receive new offers from Russia after it delivered these two ships. Now, the opportunity is lost. Other, smaller French companies that were also in the process of negotiating lucrative contracts with the Russian defense industry were forced to leave the country, the expert said.

"And all of this for what?" — Migault asked. "Are we seeing the Scandinavian or the Baltic countries, Poland or Canada competing with each other to buy all the materials that weren't sold to Russia? Of course, not."

By lacking courage to show its independence, France has not only lost its reputation and pride, but also tossed out of the window a golden opportunity to secure itself as Russia's main strategic and trade partner, especially during times when French economy can afford it the least. The special relationship that existed between France and Russia is now in history, Migault concluded.