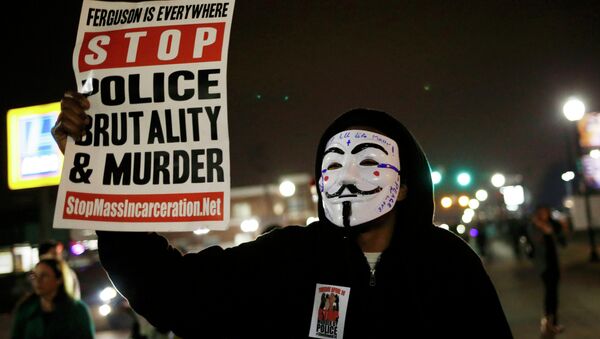 The events to be held in Ferguson, Missouri over the upcoming anniversary weekend of Michael Brown’s death will honor his life and the lives of others who fell victim to US police violence, US advocacy group Don’t Shoot Coalition Co-Chair Denise Lieberman told Sputnik.

US Legal System Rewards Police Brutality - Advocacy Group
WASHINGTON (Sputnik) — “The events planned are being held to commemorate the shooting dead of Michael Brown but also to commemorate all lives lost to police violence past year and to acknowledge the civil rights struggle we are in, to shed light on the work ahead to further crystallize this movement,” Lieberman said.

On August 7-10, the Don’t Shoot Coalition alongside a variety of other groups and churches will hold events across St. Louis to commemorate the life of African-American Brown who was shot by white Ferguson police officer Darren Wilson on August 9, 2014.

Brown’s death sparked mass protests across the country and ignited a national debate about racial inequality and the use of force by police against minority communities.

Further outrage erupted over the incident in November, when a US grand jury failed to indict Wilson for the fatal shooting, and later in March, when the US Department of Justice cleared Wilson of any civil rights violations in the tragic shooting.

I Remember Ferguson: Town Braces for Fresh Riots a Year Since Michael Brown
Lieberman said Brown’s death was a “flashpoint” in Ferguson and around the United States, bringing attention to the need to fight for black lives in the country.

The commemorating events aim to communicate the idea that the US movement against police brutality is broad and very diverse, she said.

The events will feature Christian clergymen and different artists, who have been at the forefront of the anti-police violence movement, standing hand-in-hand with the young people who brought attention to Brown’s death, Lieberman explained.

“All great civil rights [movements] have been grounded in the arts to express the kind of anger and indignity and hope people have a hard time articulating with respect to race,” Lieberman said.

Lieberman said that the events will also reaffirm the St. Louis community’s commitment to demanding justice for all lives tragically lost through police brutality in the United States.

She added that police in St. Loius need to exercise restraint and avoid escalating the situation during the commemorating event.

"Police need to exercise restraint, allow people to take to streets to demonstrate about these political issues of concern, and practice de-escalation techniques to ensure situations do not get out of hand," Lieberman said.

While three police departments in the area have implemented policies on the use of tear gas, Lieberman said human rights groups "will be watching to make sure they adhere to them."

"Unfortunately what we have seen is police themselves escalate the situation," she added. "This is completely unnecessary and dangerous."

The United States has seen multiple protests prompted by high-profile and well-documented cases of police violence over the past year.

Most recently, Baltimore was swept by days of protest riots after 25-year-old African-American Freddie Gray died of a spinal cord injury, received while in police custody, in April. Six police officers have been charged in connection with Gray’s death, all have pleaded not guilty.