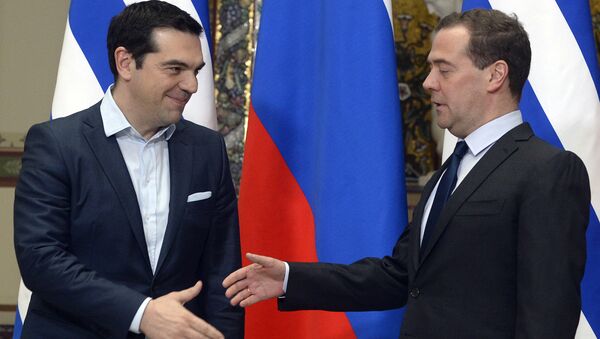 During a meeting in Egypt, Dmitry Medvedev and Alexis Tsipras discussed economic cooperation and agreed to intensify contacts on the technical level between Russia and Greece.

ATHENS (Sputnik) — Russian Prime Minister Dmitry Medvedev and his Greek counterpart Alexis Tsipras discussed economic and energy cooperation on the sidelines of the events dedicated to the opening of the New Suez Canal in Egypt, the Greek prime minister’s press service said on Friday.

"The prime ministers agreed to intensify contacts on the technical level between the two countries ahead of the ninth session of the intergovernmental commission in November," the press service said.

The opening of the New Suez Canal, parallel to the original channel built 146 years ago, has drawn numerous high-ranking officials to the ceremony.