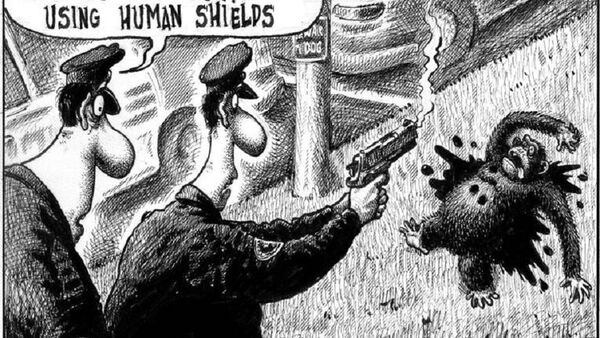 An independent reporter's investigation suggests that a sharp-witted journalist critic of Los Angeles police was fired from the LA Times because the cops had it in for him.

US Police Chases Kill 5,000 Innocent Bystanders Since 1979
The story begins 14 years ago, when journalist Ted Rall says he found himself handcuffed for jaywalking in Los Angeles. Then, on May 11 of this year, Rall, a cartoonist and frequent contributor to the Los Angeles Times, penned a satirical reminiscence of the incident, entitled "LAPD's Crosswalk Crackdown: Don't Police Have Something Better to Do?" It's a piece for which he ended up paying dearly.

By that time, Rall was already a thorn in the Los Angeles Police Department's side, thanks to his irreverent column, which frequently criticised the city's cops. Shortly after "Crosswalk Crackdown" was published, a video recording, allegedly provided by the LAPD, suddenly emerged that "proved" Rall's jaywalking story was a complete fabrication.

The video claimed Rall was never handcuffed and, contrary to his account, there was no group of onlookers that gathered to argue with the cop. The video, however, was muffled, and was accompanied by an incomplete transcript, leading some to suspect that it had been tampered with. And the LA Times reportedly didn't conduct an independent analysis of the tape.

.@BoingBoing reports on @LATimes' egregious firing of @TedRall at the behest of the #LAPD http://t.co/5areoUP1A8 pic.twitter.com/3ps4booLCG

LA Times reporter Paul Pringle told Rall, who in turn told independent investigative journalist Greg Palast, that the Times accepted the transcript as truthful because it came from the LAPD.

On July 27 Rall was fired from the Times.

But Palast, based on research he carried out independently on the LAPD recording, says the transcript provided by the police to the Times does not reflect the contents of the original video.

Here's hoping @TedRall won't regard me as a scab for pitching this cartoon to the @LATimes. pic.twitter.com/GsCHdqKXjP

For instance, the crowd of bystanders the LAPD denied existed can be heard addressing the police, shouting "Why'd you handcuff him?" and "Take off his handcuffs!"

Palast writes that the LAPD had good reason to have it in for Rall.  His reports and drawings frequently criticized the city's police, who were made infamous by the 1991 beating of Rodney King, among other incidents.

"Why am I supporting Rall? Because this is not about jaywalking," Palast writes. "This is about killing. Police killings. And the ability of journalists to report just the facts, ma'am, free of fear of retribution by the police or media executives."