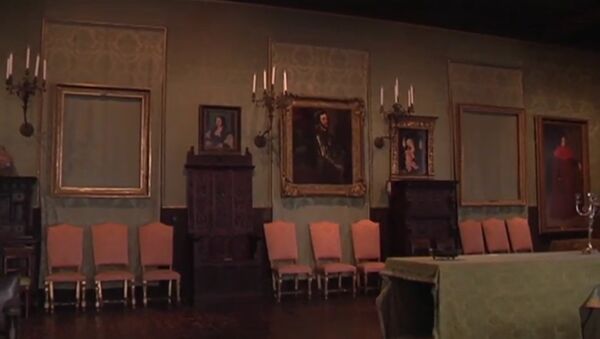 One of the most infamous art thefts in history - the disappearance over a quarter century ago of close to $500 million worth of masterpieces from Boston’s Isabella Stewart Gardner Museum - may be one big step closer to being solved in light of newly disclosed video footage that purports to show the thieves.

The US Federal Bureau of Investigation released the footage, taken by surveillance cameras just 24 hours before the painting’s disappearance on March 18, 1990.

The video shows someone exiting a car parked next to a museum back door before entering the building — with the permission of guard — at 12:29 AM the day before the robbery.  Authorities suggest this could possibly be a dry run of the crime, as the two thieves used the same door 24 hours later.

American Hustle: US Return Stolen Artworks to Italy
According to the Boston Globe, the guard who let the unauthorized man into the museum building ahead of the robbery is Richard Abath, who was also on duty the night of the theft.

Abath, now 48, denied the allegations of his possible involvement in the robbery, though he admitted to breaking museum rules by opening the door to strangers at night. He noted the men appeared to be police.

“They had hats, badges, they looked like cops, and I let them in. They said, 'Are you here alone?' And I said, 'I have a partner that's out on a round.' They said, 'Call him down.' And they said, 'Gentlemen this is a robbery,” Abath told WBUR.

"I was just this hippie guy who wasn't hurting anything, wasn't on anybody's radar and the next day I was on everybody's radar for the largest art heist in history," the former guard told NPR earlier this year.

Nicholas Roerich Estate Museum Near St. Petersburg to be Renovated
However, the FBI hasn’t confirmed Abath was tied to the robbery plot. But officials hope the newly disclosed video will help give the decades-long investigation a new push.

“By releasing this video, we hope to generate meaningful leads and ultimately recover the stolen artwork,” Vincent Lisi, the special agent in charge of the FBI in Boston, said in a public statement.

Some of the works – such as Rembrandt’s the Storm on the Sea of Galilee and Vermeer’s The Concert — are more than 5 feet tall, raising the question of how they could be transported without notice, the Guardian reported.

“We remain committed to one goal: the return of all 13 works to their rightful place, which is here at the Isabella Stewart Gardner Museum,” Security Director Anthony Amore said.  “To that end, we support the efforts that the United States Attorney and the Federal Bureau of Investigation are making to uncover any and all information related to the theft of our artwork. We believe that no stone should be left unturned.”

The Gardner Museum theft is considered by experts to be the largest private property theft in art history.

Since the robbery, the museum has left the works’ frames hanging empty in order to show their original positions.