US Heavy Military Equipment May Be Deployed in Latvia in 2016 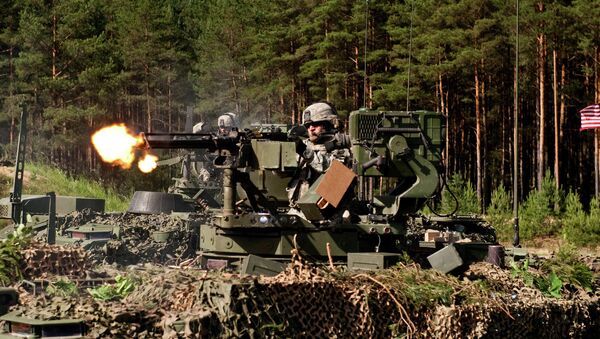 US heavy military equipment could be stationed at the Adazi military base in Latvia next year, Latvian Defense Minister Raimonds Bergmanis said.

RIGA (Sputnik) — Formal negotiations on the deployment of US heavy military equipment at the Adazi base were launched in July.

"We do not know the details at the moment. The coordination with the neighboring countries where the equipment will also be placed, such as Lithuania and Estonia, is currently in progress. The implementation will start, more likely, next year," Bergmanis said Thursday, as quoted by Latvian internet-media TVNET.

He added that this fall first second-hand combat armored vehicles, which Latvia had bought from the United Kingdom, could be delivered to the country. The contract amounting to 48.1 million euro ($52.5 million at the current exchange rate) covers a total of 123 vehicles previously used by the UK Army during operations in Bosnia and Herzegovina, Iraq and Afghanistan.

US to Deploy Heavy Weaponry in Latvia in Fall 2015 – Latvian Army Chief
Earlier, Latvia announced its readiness to buy Stinger surface-to-air missiles from the United States. On Thursday, Bergmanis said that the decision on purchasing the Stinger missiles had not been finalized yet, but it would be influenced by the economic factors.

The United States deployed rotating troops to the Baltic region following Russia’s alleged "annexation" of Crimea in March 2014. At present, about 150 US paratroopers are stationed in Latvia.

Latvia, as well as its Estonian and Lithuanian neighbors, has requested a permanent deployment of NATO forces, which is viewed by Russia as an attempt to further escalate tensions near the country’s borders and undermine regional security.