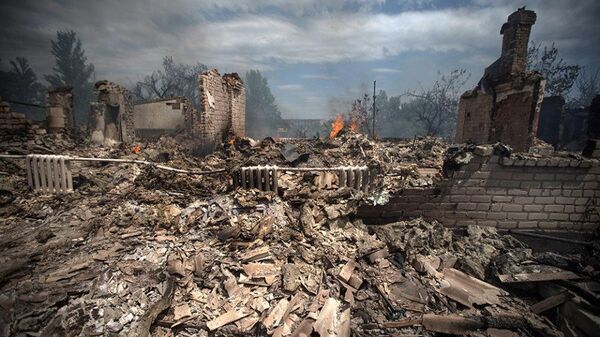 © Eugeny Romanenko
Subscribe
International
India
Africa
The US propaganda is not just false, but it is absurd, US publicist Eric Zuesse remarks, adding that it obviously insults the public's intelligence.

The entire case for Western sanctions against Russia is pure lie, American author and investigative historian Eric Zuesse emphasized, nailing the Obama administration for what he called its blatant propaganda and sheer hypocrisy.

US propaganda is "so ridiculous, no intelligent and informed person would give it any serious consideration whatsoever. It insults the public's intelligence," Zuesse stressed.

US, EU 'Give Up' Ukraine to Seek Russian Political Support
The author referred to the US State Department's "Ukraine Travel Warning" issued on July 16 and aimed at preventing American tourists from travelling to Eastern Ukraine and Crimea. Apparently aimed at frightening the US tourists out of their wits, the "warning" claimed that "individuals, including US citizens, have been threatened, detained or kidnapped for hours or days after being stopped" at checkpoints in Donetsk and Lugansk. It also warned Americans against visiting Crimea where "the Russian Federation maintains an extensive military presence."

The Obama administration obviously does not care that the reality on the ground differs tremendously from what it is saying. The US officials also remain silent about the fact that before Washington intervened in Kiev's domestic affairs, Ukraine was a unified and democratic country.

"Obama… replaced the existing Ukrainian President, Viktor Yanukovych, who, like all of his predecessors, was corrupt; and the US propaganda-machine publicized his corruption, while virtually ignoring the fact of corruption's normalcy in at least post-Soviet Ukraine (corruption that had been greatly encouraged by the US). The US didn't replace him because he was corrupt. The US replaced him because he supported a non-aligned Ukraine: neither a stooge to the US, nor to Russia," Zuesse emphasized.

However, a non-aligned Ukraine was not exactly what Washington needed.

Remarkably, the US political establishment and most notably Zbigniew Brzezinski "mapped out" the battle for Ukraine decades ago, US publicist and activist Chris Ernesto wrote in 2014.

"Ukraine, a new and important space on the Eurasian chessboard, is a geopolitical pivot because its very existence as an independent country helps to transform Russia… However, if Moscow regains control over Ukraine, with its 52 million people and major resources as well as access to the Black Sea, Russia automatically again regains the wherewithal to become a powerful imperial state, spanning Europe and Asia," Brzezinski elaborated.

'War is Peace': US Neocons Urge Washington to Flood Ukraine With Weapons
So far, Washington has desperately needed to bring Ukraine into its fold. Eventually, in November 2013 the US instigated a standoff with the Ukrainian government, dubbed the Euromaidan revolution, which then turned into a "blatant" coup.

"[E]arly on, there were individuals in the Ukrainian government who recognized that there was an international and NATO-centered plot at work in their country, designed to overthrow the President and other elected officials using ‘swarming adolescents' and other more violent elements of protest and destabilization," US analyst and author Brandon Turbeville narrated in April, 2015.

Crimea's secession from Ukraine as well as the unwillingness of Ukraine's eastern regions to recognize the illegitimate junta obviously contradicted US plans.

Foreign Combatants' Infiltration in Ukraine 'Undermines Peace Process'
Thus far, "the US State Department rejects the legitimacy of the overwhelming, and the repeatedly polling-confirmed, desire of the Crimean people to cease being Ukrainian (which they had been only from 1954 to 2014)," Eric Zuesse stressed.

"As for the residents of Donbass, Obama needs to get rid of them, because they had voted over 90% for the man he overthrew. If they stay alive and within Ukraine, then the regime that Obama installed will get voted out of office," the investigative historian added.

According to the author, the irony of the situation is that it is Vladimir Putin who wants the Donbass region to remain a part of Ukraine, while Obama does not want them to return into the Ukrainian fold.

Furthermore, while the Kremlin is urging the Ukrainian government, the EU and US to follow the provisions of the Minsk II accord, the Obama administration goes even so far as to claim that Russia "has ignored the opportunity to resolve the crisis in Ukraine diplomatically."

"A more devilishly lying country than the United States of today is hard to imagine. It's even a dictatorship: its government represents not the public (as its founders had intended) but its aristocracy (which those founders had tried to overthrow — and did overthrow, in their own era)," Zeusse emphasized, adding that meanwhile Washington continues to fool public opinion.