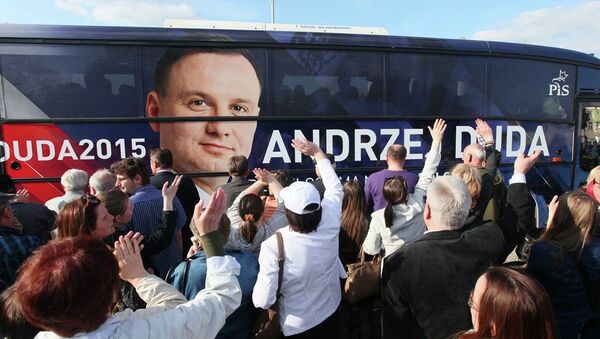 © AP Photo / Czarek Sokolowski
Subscribe
Andrzej Duda has been sworn in as Poland’s new president marking a generational shift to the right for the Eastern European country, after rising in popularity amongst young voters.

Supporters lined the route between the cathedral and the Royal Castle, chanting "Andrzej Duda" and "Bravo" before the new right wing president was sworn in before the National Assembly of lawmakers and senators. But there was one notable absence from the ceremony — European Union leader and former Polish Prime Minister Donald Tusk who was reportedly not invited.

CONGRATULATIONS to the new President of #Poland�������� Andrzej #Duda who was sworn in at the session of National Assembly! pic.twitter.com/cJdQnU4f5u

In a recent interview with the Financial Times, Duda revealed his intentions to revisit the decision-making power balance between Brussels and member states, and to "strengthen the guarantee of sovereignty within the framework of national legislation".

Duda also promises to help underprivileged people, upholding his pledge to raise the tax-free allowance and lower the national retirement age. But it will be his rhetoric on the country’s position within the European Union that will have the world listening.

With Duda in charge, Poland could be set to change the country’s relationship with the European Union, suggesting Poland should curb foreign ownership of banks.

Duda’s new powers include being in charge of Poland’s armed forces, forging the country’s foreign policy with the foreign minister and drafting his own legislation.

An article published online in conservative news magazine Wprost coinciding with Duda’s ceremony, is already calling for him to change Poland’s relationship with Germany.

"[The conservative ex-prime minister Donald] Tusk wanted good relations with Berlin to be the core of our foreign policy. As a result the Germans extended their influence in Poland in an imposing way.

"Not only in economic terms but also with regard to governance in general [during Tusk's time in office power was transferred from the president and to the prime minister — in line with the German model] and the way certain ministries are run," according to Wprost.

"Almost everything was geared towards maintaining good relations with Berlin. … That's why Duda must now come up with an alternative proposal for relations with Germany."

In his first speech as president to the two chambers of parliament, Duda said: “We need a greater presence of NATO in this part of Europe and our country” and vowed to press for more NATO security guarantees at the next summit in Warsaw.

However, it won’t be until the elections in October, when a new cabinet is formed, that the Polish people will see what promises Duda can and will keep.