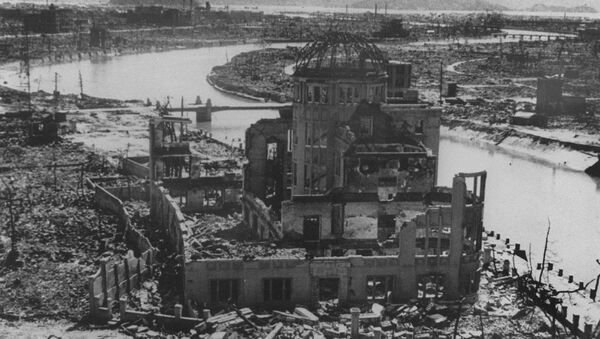 Washington should apologize for dropping atomic bombs on Hiroshima and Nagasaki in 1945, in a move that was not justified by World War II as Tokyo was preparing for imminent surrender, the secretary-general of the world’s oldest peace advocacy group, the International Peace Bureau (IPB) told Sputnik.

MOSCOW (Sputnik), Anastasia Levchenko — Earlier in the day, a Populus poll conducted exclusively for Sputnik revealed that the vast majority of Japanese people — 74 percent of those polled — believe that the bombings of the Japanese cities could not have been justified by the war situation as it was apparent that such an act would entail the mass killing of civilians.

“We do indeed believe that the US should make an apology for the atomic bombings. They were not justified by the war situation, the Japanese were about to surrender,” Colin Archer said.

He added that what is even more important is “to make steps now to get rid of all nuclear weapons” around the world.

“To achieve this will, however, require much more intense citizen pressure,” Archer pointed out.

US Nuclear Bombings of Japan in 1945 Unjustified – UNGA Ex-Delegate
On August 6, 1945, a US B-29 bomber named the Enola Gay dropped an atomic bomb that killed about 140,000 of Hiroshima’s residents. A second bombing followed three days later, this time on the city of Nagasaki, killing an additional 70,000 people.

According to the survey by Populus, some 60 percent of respondents in Japan think Washington should offer an official apology to the victims of the nuclear bombings, while only 11 percent say that an apology is not necessary.

Populus interviewed a random sample of 1,004 adults aged 18-64 in Japan between 29 July — 2 August, 2015. The survey was conducted across the country and the results have been weighted to reflect the overall Japanese adult population. Populus is a founding member of the British Polling Council and abides by its rules.