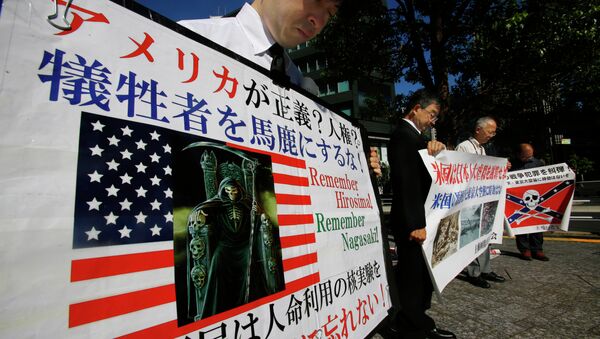 According to the General Secretary of the Campaign for Nuclear Disarmament Kate Hudson, the US apology for the nuclear bombings of Hiroshima and Nagasaki is "long overdue."

Survivors Recall Hiroshima Bombing on Its 70th Anniversary
MOSCOW (Sputnik), Yulia Shamporova — Washington’s apology to the victims of the nuclear bombings of Hiroshima and Nagasaki by the United States in 1945 is long overdue, the General Secretary of the Campaign for Nuclear Disarmament told Sputnik.

On Thursday, a Populus poll conducted in Japan exclusively for Sputnik revealed that some 60 percent of respondents thought Washington should offer an official apology to the victims of the nuclear bombings, while only 11 percent said that an apology was not necessary.

Populus interviewed a random sample of 1,004 adults aged 18-64 in Japan between 29 July — 2 August, 2015. Surveys were conducted across the country and the results were weighted to the profile of all Japanese adults. Populus is a founder member of the British Polling Council and abides by its rules.

Nuclear Bombing of Hiroshima, Nagasaki Was Unjustified – US Experts
“It is not surprising that there is a strong desire from the Japanese people for an apology. The atomic bombings of Hiroshima and Nagasaki 70 years ago were war crimes on a catastrophic scale,” she said.

Hudson stressed that hundreds of thousands of innocent civilians were targeted with weapons of mass destruction as ordinary homes, schools, workplaces and hospitals were hit by the nuclear bombs, not military targets.

On August 6, 1945, a US B-29 bomber named Enola Gay dropped a nuclear bomb that killed about 140,000 people in Hiroshima. A second bombing followed three days later, this time on the city of Nagasaki, killing some 70,000 people.