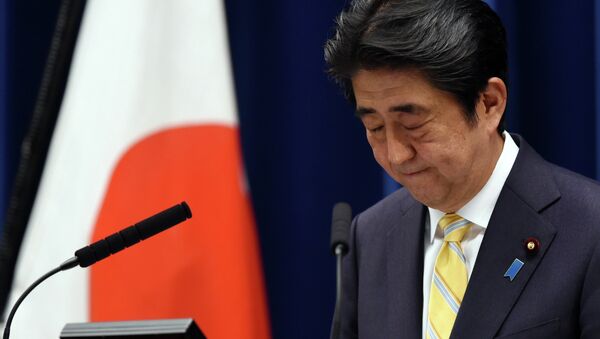 Japanese Prime Minister Shinzo Abe has announced that his country plans to present a draft nuclear disarmament proposal at the upcoming fall session of the UN General Assembly.

TOKYO (Sputnik) – Speaking in Hiroshima on Thursday, the 70th anniversary of the US atomic bombing, Abe said that the draft stipulates full nuclear disarmament.

The Thursday memorial ceremony in Hiroshima started with a moment of silence at 8:15 local time (23:15 GMT on Wednesday) in the city’s Peace Memorial Park. The time is when the US atomic bomb detonated about 600 meters (about 2,000 feet) above Hiroshima on August 6, 1945, killing around 140,000 people.

UN Secretary General Ban Ki-moon said in his anniversary address, read out by UN Acting High Representative for Disarmament Affairs Kim Won-soo, that the Hiroshima tragedy should remind the world of the necessity of getting rid of nuclear weapons "once and for all."

American Exceptionalism and the Folly of Hiroshima
Kim Won-soo attended the commemorative ceremony in Hiroshima along with Abe and US Ambassador to Japan Caroline Bouvier Kennedy.

The world marks Hiroshima Day and the International Day of Nuclear Disarmament on August 6. On that day in 1945, the US Air Force dropped atomic bomb "Little Boy" on Hiroshima. Another bomb, "Fat Man" was dropped on the Japanese city of Nagasaki three days later, on August 9.

The two US bombings are the only use of nuclear weapons for warfare in human history. Days after the bombings, Japan announced its surrender to the Allies, paving way to the end of World War II.

Each year since 1996, the UN General Assembly has passed a resolution calling on all countries to fulfill their disarmament obligations under the Non-Proliferation Treaty (NPT).