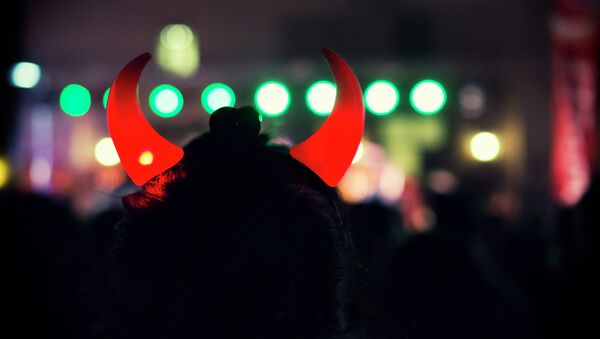 © Flickr / Spyros Papaspyropoulos
Subscribe
Desperate to find a way to criticize President Obama’s recent visit to Kenya, conspiracy-minded right wingers have proposed an imaginative question: Did video of the president’s arrival capture the image of a demon? Spoiler alert: No. No it did not.

The reaction to President Obama’s visit to Kenya last month caused a wide– and often strange – variety of criticism. There was the oft-repeated "how-much-is-this-costing-the-taxpayer" line. There were the jokes about Obama hunting down his "real" birth certificate. Some were so outraged that they even threatened to organize a mass nude protest.

Not to be outdone, Joe Kovacs with World Daily News took things further.

"And now, a mysterious flash during Barack Obama’s visit to his ancestral homeland of Kenya last month has some people wondering once again about the president’s ties to strange phenomena."

Before we get to the video in question, you may be asking yourself, “What are these other ties to strange phenomena, Joe?”

The first example is that the president has, quite frequently, been photographed with flies. House flies. "Is the White House fly infestation evidence of demonic presence and influence there?" one article asks, and is such an important question that World News Daily publishes a new story every time Obama is caught within the same frame as any flying insect.

The next is an incident which occurred in 2010. While giving a speech on financial reform in the Rose Garden, a small rodent ran across the podium. Critters in an outdoor space are evidently, in some circles, a paranormal event.

And lastly, there’s the fact that Obama looks strikingly similar to whoever played the character of Satan in the History Channel miniseries "The Bible." Of course, that series was made in 2013, so it’s a safe bet that the makeup artist on set was a Republican.

But the latest evidence for Obama’s satanic leanings refers to an ominous gray flash that appears across the screen as the president shakes hands with Kenyan delegates.

"My husband and I were watching this and I told him I saw a demon run by," an anonymous woman told WND. "He didn’t believe until I rewound the video. Please take a look!"

It’s a long video, and since you could probably watch it five times without seeing any trace of Lucifer, save yourself some time and skip to the 7:45 mark.

"A freeze-frame analysis indicates the flash may appear to have a head and shoulders as it scurries along," Joe suggests.

WND also reached out for an expert opinion from someone identified only as "a video editor."

"From a video editor’s standpoint, it could just be some sort of glitch. However, there doesn’t seem to be any logical reason as to why this glitch would appear as the rest of the video seems to be functioning fine," the expert said.

Of course, as Raw Story points out, the "demon" blob appears to actually be “an out-of-focus boom mic with what looks like a gray 'pop filter,' a bit of foam used by audio technicians to screen out high-pitched noises when recording live sound."

Too bad WND didn’t ask an audio expert, I guess.