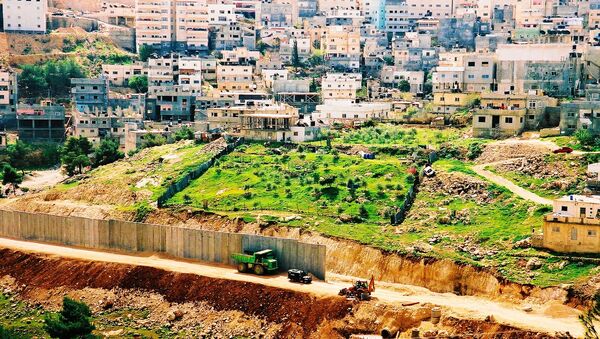 © Flickr / SarahTz
Subscribe
As tensions flare in the occupied West Bank following the burning to death of a 14-month-old Palestinian baby at the hands of Israeli extremists, a recent image circulating the web has inspired some hope for a peaceful future in an area torn apart by conflict.

Israeli Extremist Detained Without Trial After Deadly West Bank Arson
The incident began on Saturday, when a group of Israeli settlers attempted to prevent Palestinian farmers from working on the field in the village of Qusra in the Esh Kodesh settlement, north of Nablus. Clashes ensued between the two groups, and although the details of the unrest are still unclear, Israeli Defense Forces (IDF) were called into the area after reports of rock throwing.

When security forces arrived at the scene, the two groups were pelting each other with rocks. According to TheBlaze, the security forces were targeted by rocks when a police officer pulled a stun gun at a Palestinian villager.

In the middle of the fighting, photographer Shaul Golan with the Yediot Ahronoth newspaper, managed to capture an image that truly stood out from the violence.

"Amid all the chaos, I saw this female officer. She was really scared," Golan said. "She was abandoned in the field and her so-called enemies were guarding her. I knew right away it was a special moment."

One of the men, standing to the officer’s right and wearing a blue shirt, was later identified as Zakaria Sadah, a Palestinian field worker with the Israeli organization Rabbis for Human Rights (RHR). The group of Israeli rabbis was founded with the goal of raising public awareness about Tel Aviv’s human rights violations.

According to RHR, the image shows Sadah calling out "Don’t shoot!" at the police. He then proceeded to escort the policewoman back to the Israeli security forces.

While the image, which was quick to circulate the web, offers a rare glimpse of hope in a long history of conflict, many were quick to criticize the two men for their act. Speaking to TheBlaze, Sadah said that he is being accused by many as a Palestinian traitor for protecting the Israeli woman.

"There are those who are writing against me in the Palestinian social media because we protected a policewoman, as if we’re 'traitors,'" he said. "On the other hand, I see that settlers are attacking me. So you feel you’re under fire from both sides."

The criticism toward an otherwise simple and humane act can easily be dismissed as cynical, but has become emblematic of the decades long and seemingly endless Palestinian-Israeli conflict. Sadah, however, remains hopeful and seems as dedicated as ever to preach for peace by example.

000000
Popular comments
Wampler 2000 in 'War Games' "Strange game. The only way to win is to not play." Sometimes the pathway to true peace is one that requires sacrifice of the self, that being to do the right thing even it means antagonizing those of both sides. The leaders of both Isreal and the Palastinian political groups have antagonized each other, often needlessly, when peacefull solutions had been offered in the past, and corrupt Yassar Arafat (and others) desired political donations more than true peace and so refused such deals, even though they would have been given half of Jerusalem at that time. Isreal for treating everyone as enemies and shelling whole neighborhoods because of the actions of a few, and ongoing plowing under of homes and orchards.... It remains for the citizens themselves to learn how to stand down and actually love their 'enemies' and perhaps standing in their opponent's shoes for a bit, to turn and do what is actually morally right.
White_Eagle1
6 August 2015, 01:42 GMT
000000
Newsfeed
0
New firstOld first
loader
LIVE
Заголовок открываемого материала
Access to the chat has been blocked for violating the rules . You will be able to participate again through:∞. If you do not agree with the blocking, please use the feedback form
The discussion is closed. You can participate in the discussion within 24 hours after the publication of the article.
To participate in the discussion
log in or register
loader
Chats
Заголовок открываемого материала
Worldwide
InternationalEnglishEnglishMundoEspañolSpanish
Europe
DeutschlandDeutschGermanFranceFrançaisFrenchΕλλάδαΕλληνικάGreekItaliaItalianoItalianČeská republikaČeštinaCzechPolskaPolskiPolishСрбиjаСрпскиSerbianLatvijaLatviešuLatvianLietuvaLietuviųLithuanianMoldovaMoldoveneascăMoldavianБеларусьБеларускiBelarusian
Transcaucasia
ԱրմենիաՀայերենArmenianАҧсныАҧсышәалаAbkhazХуссар ИрыстонИронауОssetianსაქართველოქართულიGeorgianAzərbaycanАzərbaycancaAzerbaijani
Middle East
Sputnik عربيArabicArabicTürkiyeTürkçeTurkishSputnik ایرانPersianPersianSputnik افغانستانDariDari
Central Asia
ҚазақстанҚазақ тіліKazakhКыргызстанКыргызчаKyrgyzOʻzbekistonЎзбекчаUzbekТоҷикистонТоҷикӣTajik
East & Southeast Asia
Việt NamTiếng ViệtVietnamese日本日本語Japanese中国中文Chinese
South America
BrasilPortuguêsPortuguese
NewsfeedBreaking
19:21 GMTAmerican Author Alice Sebold Apologises to Man Cleared of Her Rape After Spending 16 Years in Jail
19:15 GMTControversy Over Messi's Ballon d'Or Win Escalates as Ronaldo Backs Claims That PSG Ace Stole Award
19:13 GMTVideo: Russian Scientists Unveil Biomedicine Application for Shape-Memory Alloy
19:06 GMTMacron Calls BoJo 'Clown' With 'Attitude of Good-For-Nothing', French Media Claims
18:59 GMT'UFO Cloaked Inside Cloud' Spotted Above Florida, Blogger Claims
18:48 GMT'Sending a Message': Space Force General Claims US Satellites Are Attacked on Daily Basis
18:47 GMTCalifornia Health Officials Identify First Case of Omicron Covid Variant in United States
18:33 GMTRepublicans Fear 'Civil War' in Wake of Ilhan Omar Scandal, Voice Concerns About 2022 Midterms
18:05 GMTDeath Toll From Michigan High School Shooting Rises to 4
17:05 GMTWhat Pushed Donald Trump to View US Intelligence Community With Suspicion During His Tenure
16:42 GMT'Melding of Services': Australia Won’t Lose ‘Sovereignty’ Under AUKUS, says Biden’s 'Asia Tsar'
16:42 GMTIndia's Top Car-maker Maruti Suzuki's November Sales Down 9% On Chip Shortage
16:23 GMTMassive 'Potentially Hazardous' Asteroid 'Taller Than Chrysler Building' To Approach Earth Next Week
15:38 GMTUK Parliament Reportedly on Lockdown After Man Cycles Through Security Gates - Photos
15:34 GMTUS School Shootings on the Rise After Pandemic-Caused Hiatus
15:23 GMTDominic Raab Under Pressure To Bring In UK Child Cruelty Register After Approving ‘Tony’s Law’
15:08 GMTRonaldo's Bodyguards Investigated in Portugal Over Suspicion of Illegal Work – Report
14:46 GMTAnother UK Energy Supplier Pushed Out of Market by High Gas Prices
14:41 GMTAntony Blinken: US Preparing Additional Sanctions on Belarus in Coordination With EU
14:27 GMTRussia Contracts Full Cycle Production of Sputnik V in Vietnam