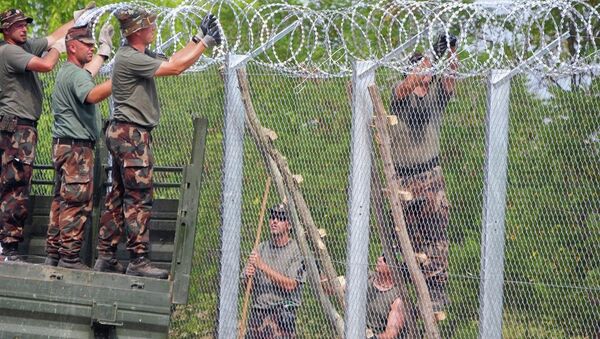 A razor wire fence monitored 24 hours a day by armed guards has been extended by the Bulgarian government to completely seal off its border with Turkey.

The 15 feet high and five feet wide fence is, according to the authorities, to stop migrants from crossing into the country. A recent report in The Times suggested that more than 11,000 people, mainly from Syria attempted to illegally cross into Bulgaria from Turkey in 2013.

And according to Bulgarian border Chief Ivan Stoyanov, the fence complete with infra-red motion sensitive cameras has prevented more than 500 migrants from crossing the border in recent months, forcing them to re-route.

But it’s not just Bulgaria building walls within the European Union — Hungary has passed a law allowing a metal fence, dubbed a new ‘iron curtain’ to be built on its border with Serbia to stop the influx of migrants arriving into the country through a different route.

The Western Balkan route isn’t as infamous in the European press as perhaps the Mediterranean Sea route. Nevertheless, it has become the most popular path for migrants desperate to travel to the European Union.

People travel from Turkey to Greece by sea, then overland across Macedonia to Serbia and into Hungary. But the Hungarian wall has caused outrage in Serbia with the country’s prime minister expressing shock and outrage at the fence keeping out the migrants. Aleksandar Vucic told reporters:

"Building walls is not the solution. Serbia can’t be responsible for the situation created by the migrants, we are just a transit country. Is Serbia responsible for crisis in Syria?"

According to the Hungarian government, around 54,000 migrants entered the country from Serbia in 2015 – compared to 43,000 in 2014 – and conditions are deteriorating. A recent report by Amnesty International said migrants, refugees and asylum seekers have reported being pushed, slapped, kicked and beaten by Serbian police near the border with Hungary.

The report, 'Europe’s borderlands: Violations against migrants and refugees in Macedonia, Serbia and Hungary' finds that more and more migrants are being left stranded in legal limbo across the Balkans.

"The situation is exacerbated by push-backs or deportations at every border," the report says.

Freedom of movement in the EU is enshrined in the EU treaties, yet member states are closing their borders and shunning the core principle of its membership within the EU.

And it’s not just a razor wire fence on the Bulgarian border and a metal wall built in Hungary barricading EU countries, Denmark’s right wing Danish People’s party is demanding the re-erection of border controls and France and Austria recently shut their borders with Italy – refusing entry to hundreds of migrants.

Britain’s response to the migrant crisis in Calais is to send more reinforcement fencing and sniffer dogs to help deal with the numbers of migrants trying to enter the UK through the Channel Tunnel.

The action by many countries to build walls and borders has been condemned by charity Medecins Sans Frontieres. Migration adviser Aurelie Ponthieu recently said: "The deteriorating situation is not due to unmanageable numbers of migrants and refugees. It is a direct result of chronic shortcomings in the EU’s policies in handling new arrivals."

"Member states spend their time talking about closing borders, building fences and issuing threatening ultimatum to each other."

Members of the European Parliament are yet to agree on a quota system to cope with the numbers of asylum seekers arriving by boat on the Mediterranean Sea. Meanwhile inland, EU countries continue to block their borders to migrants.