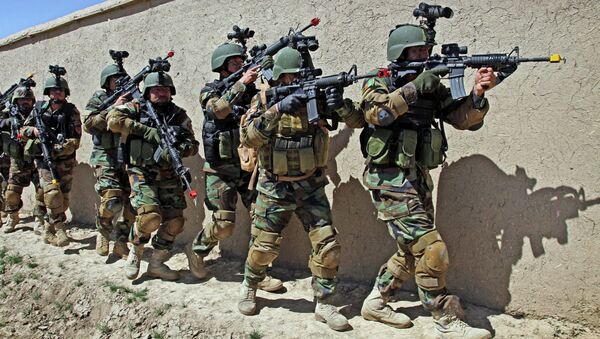 WASHINGTON (Sputnik) — The US-led NATO combat forces withdrew from Afghanistan in December 2014 after a 14-year occupation. Combat operations in the country gave way to a US training and support mission for the Afghan National Security Forces (ANSF), dubbed Resolute Support, on January 2, 2015.

“They [Afghan security forces] lose 4,000 per month, and a lot of that you would think is battlefield casualties… that is not the case. The biggest case is folks that go AWOL, absent without leave.”

Campbell explained that poor leadership, fatigue, lack of training and hunger are driving the high attrition rate within the Afghan security forces.

“It is because you have young soldiers who have been fighting in Helmand [province] for two or three years and they haven’t had a break. They may not be getting the right food that they deserve… [or] they haven’t had an opportunity to train.”

The US military is working with the Afghan government on efforts to retain and recruit more troops, he added.

Campbell also noted the Afghan security forces need to make recruitment a year-long activity, as opposed to stopping the process during the “fighting season” that lasts from April to October.

Overall, Campbell said, despite these monthly losses, the Afghan security forces have the weaponry, military equipment, training and leadership to prevent the Taliban from ousting President Ashraf Ghani’s regime in Kabul.