US Nuclear Modernization Program to Cost 5% of Defense Budget - Study 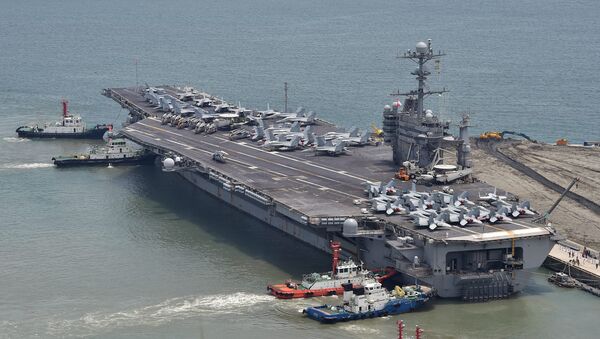 © AFP 2022 / JUNG YEON-JE
Subscribe
The modernization of the US nuclear triad over the coming 30 years is affordable under any defense budget, as long as they are made a priority, Center for Strategic and Budgetary Assessments (CSBA) Senior Fellow Todd Harrison told Sputnik.

WASHINGTON (Sputnik), Leandra Bernstein — Harrison explained that even under the “worst case” defense budget, restricted by budget caps, the total projected costs of modernizing the US land, sea, and air-based nuclear delivery systems will only amount to 5 percent of the defense budget.

“It is still just 5 percent of the total defense budget," Harrison told Sputnik on Tuesday, referring to findings in a report he authored on the cost of US nuclear forces over the coming three decades.

This week, the CSBA released a new study to more accurately project the costs of modernization, which it put at approximately $963 billion in the three decades from 2014 to 2043.

By the early 2040s, the United States is expected to replace and upgrade all three legs of its nuclear triad, amounting to costs that some experts have put at close to $1 trillion.

Modernization costs are expected to peak in the mid-2020s, costing the United States up to $40 billion per year.

Funding the program will “absolutely” be a challenge, Harrison acknowledged. “But is it a matter of affordability? No. It is a matter of prioritization.”

Nuclear weapons remain a key component of the US national defense strategy and officials have maintained their commitment to protecting the nuclear deterrent.

The Pentagon has estimated it will need an additional $10 to $12 billion annually beginning in 2021 in order to support the nuclear modernization program, which some analysts have decried as unaffordable costs.