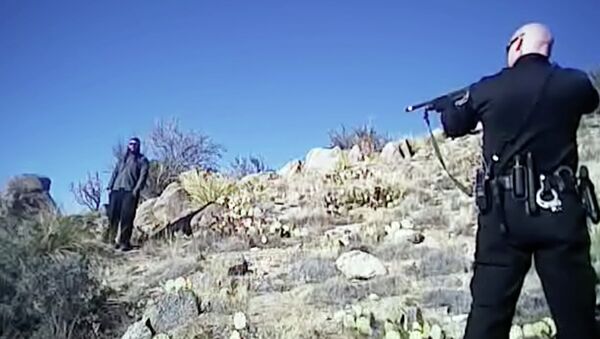 © AP Photo / Albuquerque Police Department
Subscribe
At a preliminary hearing Monday, a special prosecutor appointed to the James Boyd murder case called the response by Albuquerque police prior to the homeless man’s death “a paramilitary response,” and stated that the officers “created the danger themselves.”

In a March 2014 incident that was caught on camera, Boyd, 38, who suffered from paranoid schizophrenia, was camping on a hillside when 19 officers armed with over 700 rounds of ammunition surrounded him.

"What was the crime that prompted this paramilitary response? It was not a terrorist act. It was illegal camping," Special Prosecutor Randi McGinn said during his opening statement at the hearing.

Boyd had turned to gather his belongings to leave when Officer Dominique Perez and former Detective Keith Sandy each fired three live rounds at the man.  He died in the hospital shortly after having his arm amputated.

Albuquerque Police claim that the shooting was “justified,” as Boyd had made “threatening gestures”- from 30 feet away.  The video appears to show him surrendering.

The department’s version of events again came under fire when dashcam footage was released showing Officer Sandy discussing his intent to shoot Boyd in the penis (which is oddly where Boyd would have been struck, had he not been in the process of turning), before Sandy had even arrived on the scene or been fully briefed on the situation.

"They created the danger. It was not Mr. Boyd who came at them," McGinn told the court during the hearing.

Lawyers for the officers claim that the shooting of the “crazy man” was justified.

"I'm surprised (prosecutors) didn't argue that Mr. Boyd would have been justified to stab (the officers),” attorney Sam Bregman, who is defending Sandy, stated in court.

Luis Robles, one of the lawyers representing Perez, said the victim is responsible for his own death.

In an interview with USA Today in September, Albuquerque Police Chief Eden said, “I believe there are people on the force who shouldn’t be on the force,” claiming that he is stuck with bad cops thanks to police unions making discipline for officers extremely difficult.

“Based on our investigation, we have reasonable cause to believe that APD engages in a pattern or practice of use of excessive force, including deadly force, in violation of the Fourth Amendment and Section 14141,” the DOJ review reads. “Our investigation included a comprehensive review of APD’s operations and the City’s oversight systems. We have determined that structural and systemic deficiencies — including insufficient oversight, inadequate training, and ineffective policies — contribute to the use of unreasonable force.”

The preliminary hearings in the Boyd case are expected to continue throughout the week.