Why Kiev's Comparison of Donbass With Srpska Krajina Is Simply Wrong 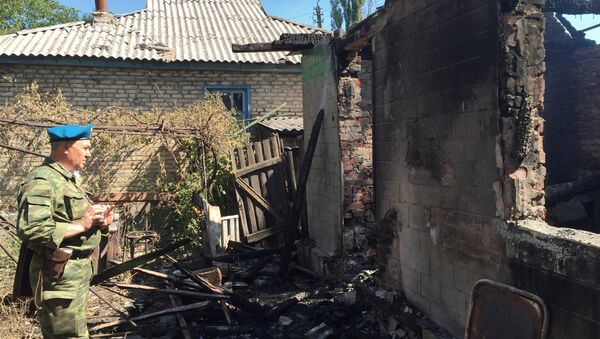 © Sputnik
/
Go to the mediabank
Subscribe
International
India
Africa
20 years after the Croatian military undertook 'Operation Storm' which forced at least 220,000 ethnic Serbs living in the self-proclaimed entity Republic of Srpska Krajina to flee their homes as refugees, politicians in Kiev seek to draw mistaken parallels with the Donbass region in Ukraine.

Kiev’s Self-Rule Plan for Donbass Violates Minsk Agreements
Attempts by some politicians and commentators in Ukraine to draw parallels between the fate of the Republic of Srpska Krajina [RSK] and the Donbass region of Ukraine are mistaken, experts on the Balkan conflict told gazeta.ru on the twentieth anniversary of the military operation, which forced at least 220,000 ethnic Serbs living in Croatia to flee their homes as refugees.

Elena Guskova, who heads the Center for Studies of the Balkan Crisis, of the Russian Institute of Slavic Studies, explains why the parallel can be tempting for some observers of the Ukraine conflict.

Kiev's Shelling of Horlivka in Donbass Leads to Civilian Casualties - DPR
"Purely superficially these two events look very similar due to the following factors. Within a single state a territorially separate group exists which wants more rights. The Krajina wanted cultural and political autonomy, and also greater political competences. Lugansk and Donetsk have made the same demands; right from the beginning they were not talking about independence. As well as that, the international community to a large extent, particularly the US and Western European countries, are currently supporting Ukraine. Then, they were helping the Croats."

However, Guskova is confident that the residents of Donbass are not facing the same fate which befell the ethnic Serbs living in what is now territory under the complete control of Zagreb.

"In Croatia there was no negotiation process, even the kind of difficult one that is currently going on in Ukraine. Apart from that, absolutely nobody gave backing for the RSK, even Belgrade did not officially."

"I don't think that now Kiev will decide to undertake a wide-scale military operation. Without the support of Washington and NATO it won't do that, and that support is not possible while Russia is providing help to Novorossiya."

Mikhail Polikarpov, a volunteer fighter in the former Yugoslavia and author of several books about the wars in the Balkans, and about Ukraine, also said he believed the parallel is misleading.

"If you are going to draw a parallel, you need to take into account that in 1995 the bulk of Serbs living in the Krajina did not want to fight. They had not been training their military personnel," said Kravchenko.

"In contrast, Croatia for three years strengthened its army, with help from the US (which was not always that useful) Zagreb used its past experience of the unsuccessful military campaign of 1991- 1993. Apart from that, in Croatian society there was a serious patriotic and nationalist drive."

"As regards Ukrainians, the unsuccessful campaigns for mobilization show that they don't want to take part in a war. They are finding ways to avoid service, including fleeing to the territory of other countries."

The possibility of undertaking such a military operation has been voiced by politicians in Kiev, including Andrey Parubiy, the vice-speaker of Ukraine's Verkhovnaya Rada, who last week sought to make a parallel between the fate of the RSK and the Donbass region.

"The situation then was very similar to what is now happening in Ukraine," Parubiy told Ukrainian television.

"'Buy time' — that is what our international partners often say to us."

According to figures from Veritas Research Center in Belgrade, 1,853 Serbs were killed or remain missing after the operation, and at least 220,000 residents of the RSK were forced to leave their homes and flee to neighboring Bosnia and Serbia, despite the territory of RSK supposedly being under the protection of the UN Protection Force. 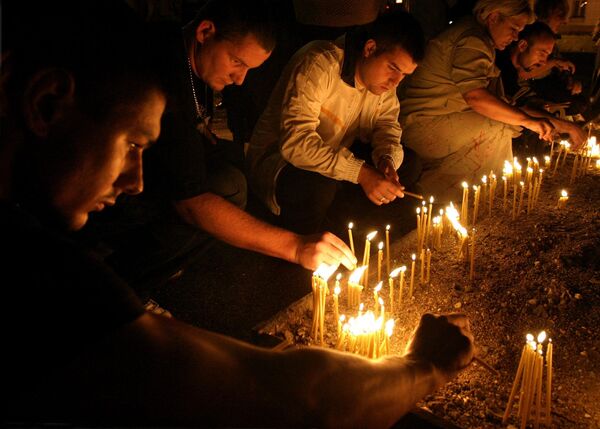 Croatian Orthodox Serbs, light candles in the western Bosnian town of Banja Luka for victims of the Croatian military operation "Oluja" conducted in the summer of 1995. File photo
© AFP 2023 / STR
On August 4 the Croatian authorities plan to commemorate the 20th anniversary of the end of the Oluja operation with a military parade in Zagreb of around 3,000 military personnel.

Around 130,000 Croatian troops took part in the operation, with NATO support, which ended on August 5 when the Croatian army took control of Knin, capital of Srpska Krajina, and a total of 10,400 sq km of territory, which is now part of the Republic of Croatia.

The operation is regarded in Serbia as the greatest act of ethnic cleansing on the territory of modern Europe since the Second World War.

In Serbia and Republika Srpska, one of the two autonomous republics which make up Bosnia and Herzegovina, August 5 has been declared a day of remembrance, and a memorial service for the victims will take place at St. Mark’s Church in Belgrade.