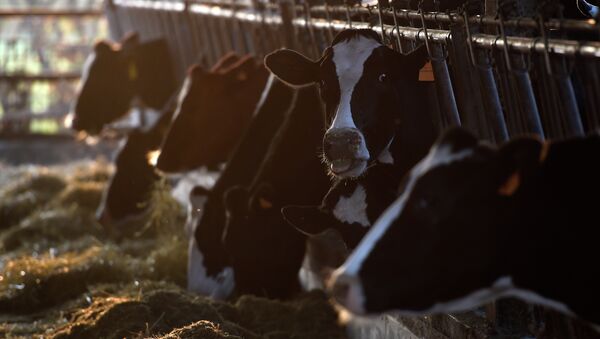 © AFP 2021 / OLIVIER MORIN
Subscribe
Fabrizio Bertot, a politician from Forza Italia party, said that Italy understood that damage would be caused by anti-Russia sanctions, but had to participate to maintain ties with the European Union.

Italian Lawmakers’ Trip to Crimea Unlikely to Interest Media - Politician
MOSCOW (Sputnik) —The Italian economy has been negatively affected by the economic tit-for-tat between Russia and the West involving low export to Russia and a weaker ruble which has lowered Russia's purchasing power, a politician from Forza Italia party told Sputnik.

“The result at the moment is very very bad, because our export is down by some 30 percent in agriculture. And we have the troubles in the tourism industry, with the value of the ruble weakening, which is the result of the economic and financial war that is being waged, so the Russian tourism to Italy is much lower,” Fabrizio Bertot said.

He stressed that Italy understood that damage would be caused by anti-Russia sanctions, but had to participate to maintain ties with the European Union.

“But the problem is in the future. So when the sanctions are over, Russia will have its own substitute for our products, so they will not import our mozzarella,” Bertot said.

Berlusconi: Forza Italia Party to Urge Lifting of Anti-Russian Sanctions
The European Union, the United States and its allies imposed sanctions against Russia for its alleged involvement in the Ukrainian crisis. The allegations have been refuted by Moscow.

Russia responded with banning food imports from the countries that sanctioned it. The embargo was prolonged earlier this year.

In June, Russian President Vladimir Putin and Italian Prime Minister Matteo Renzi discussed the sanctions against Russia. According to the Russian president, Italy, traditionally close to Russia in various fields, lost over $1 billion due to the restrictive measures