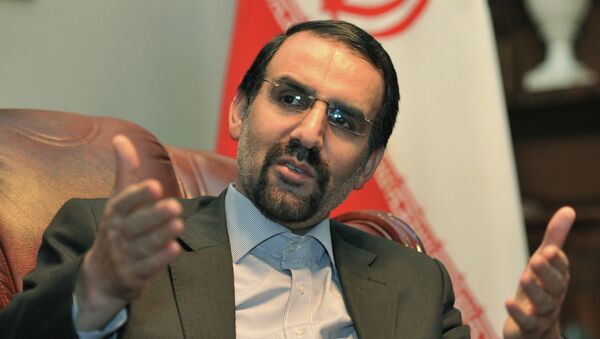 © Sputnik / Sergey Kuznecov
/
Go to the photo bank
Subscribe
Iran's Ambassador to Russia Mehdi Sanai said in his blog that Iran has no intention of holding talks with America on bilateral, regional, or global issues, and dialogue between the two countries will only be concentrated on the nuclear program.

"A new form of nuclear cooperation will be created between Iran and Russia, associated with the establishment of a center for the production of stable isotopes on the Fordow [uranium enrichment] facility, and the exchange of excess low-enriched uranium for natural uranium," Sanai wrote on his blog.

In July, Russian Foreign Minister Sergei Lavrov said Moscow will actively participate in the reprofiling of Iran's Fordow former enrichment facility as an isotope production facility for medicinal and industrial purposes and the removal of uranium from the country.

The Fordow reprofiling and the reduction of Iranian stockpile of low-enriched uranium by 98 percent to 300 kilograms (660lbs) are stipulated by the deal on Iran's nuclear program, reached on June 14 by Iran and the P5+1 group of countries, comprising Russia, China, the United States, the United Kingdom France and Germany.

Not Just Oil: Iran, Russia Have 'Great Potential' for Cooperation
“The political courses of Iran and the United States on regional and global issues do not coincide and in many cases contradict one another. Iran has no intention of holding talks with America on bilateral, regional, or global issues, and dialogue [between the two countries] will only be concentrated on the nuclear program,” Sanai said.

He noted, however, that Tehran and Moscow have serious common interests in various regional issues, including in Central Asia, the Caucasus and Caspian Sea region, Afghanistan, and in the Middle East.

He said that Russia and Iran hold “single views on issues tied to the transfer of international order, the United States’ unilateral policy, the limitations on national sovereignty and interference by the West in the domestic policies of countries, as well as the expansion of NATO and missile defense systems.”

The deepening of cooperation with Russia, China and India are the major priorities for the Iranian government's foreign policy, Sanaei added.

2015 Will Be All About Iran, China and Russia
One of the reasons Tehran's relations with Washington have been tense is Iran's controversial nuclear program. The deal to ensure the peaceful nature of Iran's nuclear program was reached on July 14 by the international negotiators, including China, France, Russia, the United States, the United Kingdom, Germany and Iran.

Iran and Russia share a mutual interest of maintaining stable prices on the global oil market, according to Mehdi Sanai.

"The truth is that Iran and Russia have common interests in the oil and gas industry, namely maintaining price stability on the global market," Sanai stated.

Due to oversupply in the global market, oil prices have dropped more than twofold against the 2014 summer levels, when the price of Brent crude stood at about $115 per barrel. The prices are now hovering at about $50 per barrel.

Russia is Ready to Import Iranian Oil Under Barter Deal
The oil-dependent economies of Iran and Russia have been hit by the plummeting prices.

On July 14, Iran and the P5+1 group, comprising China, France, Russia, the United States, the United Kingdom and Germany, reached an agreement to ensure the peaceful nature of Iran's nuclear program in exchange for the easing of sanctions against the country, including its energy sector.

According to the National Iranian Oil company, the country's oil exports could be increased to up to 4 million barrels per day from their current 3-million-barrel level once the sanctions are eased.