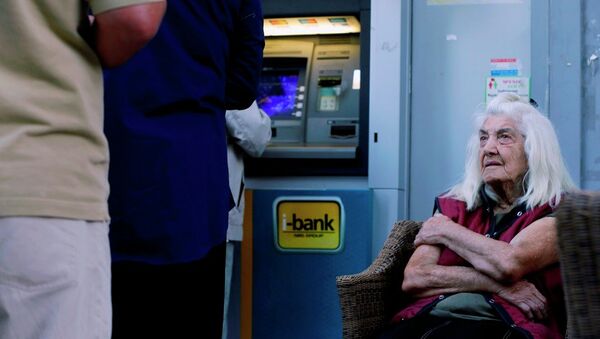 © AP Photo / Thanassis Stavrakis
Subscribe
International
India
Africa
Analysts at ratings agency Standard & Poor's (S&P) have lowered their economic forecast for the EU from "stable" to "negative", over fears of a Greek default and a possible UK exit from the union.

The crisis in Greece — which is currently negotiating a third bailout by its creditors — is at the root of the downgrade by S&P, raising fears that the EU credit rating could be cut from AA+, which would affect the price of borrowing funds on international markets.

The agency said the negative outlook was particularly justified by the repeated commitments by the EU to support Greece, which is threatened with bankruptcy.

"The EU's repeated use of its balance sheet to provide higher-risk financing to EU member states (most recently including Greece), without the member states' paying in capital," was mentioned as a factor in a press release.

"The negative outlook on the EU also reflects its lack of any paid-in capital, a key difference compared with other multilateral institutions. The EU continues to run a very large negative net asset position, largely reflecting its considerable pension obligations."

The agency cited worries over the Juncker Plan — named after Jean-Claude Juncker, the current President of the European Commission — which aims to mobilize investments of at least $346 billion (€315bn) in three years.

S&P also expresses concern about the possibility that Britain could leave as one of the largest EU contributors. UK Prime Minister David Cameron has promised an In/Out referendum of Britain's membership of the EU, which could take place as early as next year. When S&P last reviewed the EU's rating, they revised their outlook for the UK to negative, reflecting concerns about a referendum to exit the EU.

The agency had already reduced France to negative and said:

Britain, Germany and France together are the largest contributors to the EU budget — about 70% between them. In spite of the negative outlook, the EU retains its AA+ rating, which means that is has a high grade in terms of sovereign credit rating.