Erdogan: Turkey Will Not Recognize Crimea's Reunification With Russia 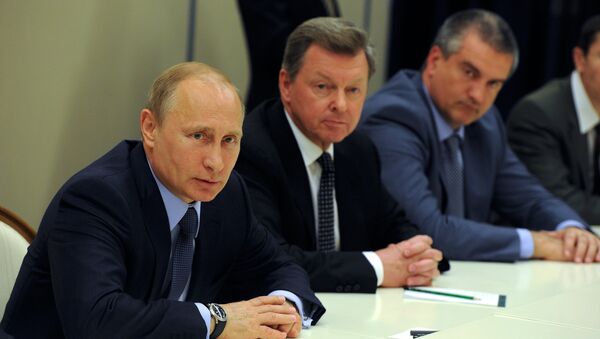 © RIA Novosti . Michael Klimentyev
/
Go to the mediabank
Subscribe
International
India
Africa
Ankara considers Crimea's reunification with Russia, as deplorable as repression against the Crimean Tatars in the last century and will not recognize it, Turkish President Recep Tayyip Erdogan said, as quoted in a foreign ministry statement emailed to Sputnik Turkey on Monday.

MOSCOW (Sputnik) — Crimean Tatars are a Turkic ethnic group that formed in the Crimean Peninsula in the 13-17th centuries. In 1944, Crimean Tatars were expelled to Central Asia under an order of then-Soviet Union leader Joseph Stalin. In the mid-1980s they were allowed to return to the region.

"Turkey did not and will not recognize Crimea’s annexation. Our priority in the Ukrainian crisis is peace, prosperity and security for Crimean Tatars. We are taking every step and conducting all necessary negotiations in order to overcome pressure and difficulties they are facing. You can be sure that we will continue our support," the address to the Second World Congress of the Crimean Tatars held in Ankara over the weekend reads.

Russia
Crimeans Happier in Russia Than in Ukraine - European Parliamentarian

The document said the rights of the Crimea Tatars have been damaged by deportation and repression, labeling the "illegal annexation of Crimea" a similar incident.

Erdogan's administration told Sputnik it was not aware of Erdogan’s message.

Following a March 2014 referendum, Crimea and its special-status port city of Sevastopol seceded from Ukraine and reunified with Russia.

Apart from accusations of a military annexation, dismissed by the Kremlin, several EU countries blamed Moscow for alleged violation of the rights of Crimean Tatars.

In April 2014, Russian President Vladimir Putin signed a decree rehabilitating those ethnic minorities that suffered during the Stalin era, including Crimean Tatars, Armenians, Greeks and Germans.