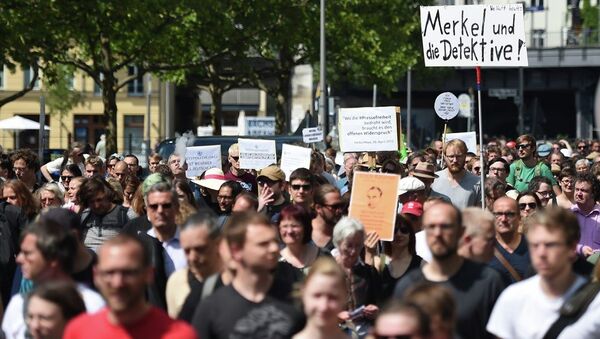 A huge political row has broken out in Germany over the decision by the Federal Attorney General to launch a treason investigation into the digital rights group Netzpolitik.org for the organization's role in exposing the role of the German secret service in the mass surveillance of its citizens.

Germany Justifies Investigation Into Journalists Who Disclosed Spy Targets
The German Justice Ministry let it be known Monday that it had warned Federal Prosecutor General Harald Range against pursuing the investigation, saying it was wrong, according to the newspaper Süddeutsche Zeitung. However, this has been denied by the Attorney General's office, which said that the ministry had only indicated that such an investigation could be "problematic".

In February 2015, Netzpolitik.org reported on the German government's plans to collect and monitor huge volumes of Internet data, mimicking the mass data acquisition by the NSA. The report included the full text of a leaked secret surveillance budget from 2013. A second article exposed the "Erweiterten Fachunterstützung Internet" or "Extended Specialist Support Internet" department of Germany's intelligence agency.

Netzpolitik.org announced last week that it had received a letter from the Federal Attorney General and the President of the German Domestic Security Agency, stating that two of its reporters and an unknown party were under investigation for "treason" and could face two years in jail. The letter confirmed the agency was investigating reporters Markus Beckedahl, Andre Meister and an "unknown" party (presumed to be their source).

The letter stated that they were being investigated for a possible breach of the German penal code which states that: "Whosoever […] allows a state secret to come to the attention of an unauthorized person or to become known to the public in order to prejudice the Federal Republic of Germany or benefit a foreign power and thereby creates a danger of serious prejudice to the external security of the Federal Republic of Germany, shall be liable to imprisonment of not less than one year."

According to the newspaper, intelligence officials want to know how the journalists gained the information.

The Justice Ministry says it is looking into whether the information published was classified at all, while the prosecutor's office says it is also awaiting the decision over whether the documents were classified.

The decision — which may come as soon as Thursday — was apparently delayed because a key member of staff was on holiday.