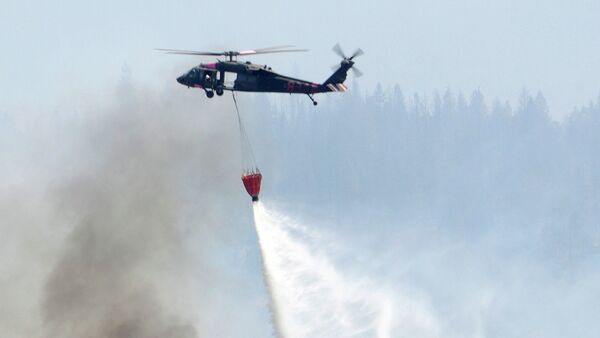 A series of fires across California in recent days have burned thousands of acres and placed hundreds of houses in danger.

Nearly 21 wildfires — ranging in size but widely spread — have destroyed 40 residences since Saturday and continue to post a threat to 6,000 buildings, said local officials.

A temperature change left high hopes for a slowdown in the spread of the big Rocky Fire, however authorities said firemen will need more than a drop in the heat to put out the fire on the severely dry Californian land.

According to Daniel Berland, spokesman for the California Department of Forestry and Fire Protection (Cal Fire), wind and the area's mountainous ground have caused the fires to spread over 24,000 acres with the flame eating up 47,000 acres in Lake, Yolo and Colusa counties.

"The (Rocky) fire is expected to have significant activity and growth," Cal Fire said in its late Saturday advisory. "Current strategic constraints include lack of access to areas of the fire, very hot and dry weather, critical fuels and changing winds…. In total, all evacuations impact over 12,100 citizens living in over 5,156 residences".

"The drought experienced by the state for 4 years has caused ideal conditions for wildfires to burst out," they noted.

Almost 9,000 firefighters battled with 21 fires from the Frog Fire situated near the Oregon border to the Cutca bazle near Mexico.

The #RockyFire in Lake County has grown to 25,750 acres & continues to burn north toward Hwy 20. Still 5% contained. pic.twitter.com/os4bVnVt4p

The brutal fire has taken the life of one South Dakota fireman David Ruhl, a father of two, who died in the Frog Fire in Northern California's Modoc National Forest, near Adin.

Some Lake County residents have been following  the situation which Cal Fire is posting on its website.

"We can see the smoke, and it appears to be blowing near us, but there are no evacuations here that I know of," Ted Mattila of Buckingham Golf and Country Club in Kelseyville said Saturday. "We are open for business and hoping the wind blows the other way because we have two tournaments tomorrow."

Local officials claimed "good progress" in two other fires: the Willow Fire northeast of North Fork in the Sierra National Forest and the Cabin Fire east of Porterville in the Sequoia National Forest.

regram @maxwhittaker A firefighter battles a spot fire on the Rocky Fire in California's Lake County. The fire has ballooned to 15,000 acres in just a couple days, and is only 5% contained. There are currently 18 wildfires burning in #California. @prime_collective #onassignment for @reuters #wildfire #drought #fire #climatechange

"If the weather conditions are favorable today, firefighters may begin a strategic firing operation near Pecks (Canyon) to remove unburned fuel between the fire line and the main fire in the afternoon," the statement said.

Most of the wildfires have been located in Sacramento and other areas of Northern California, where temperatures have reached 100 degrees.