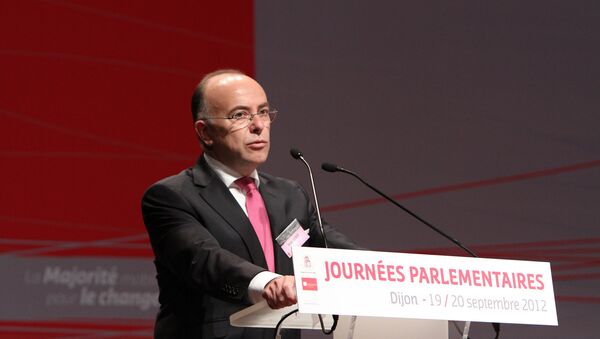 The migrant crisis engulfing the French port of Calais is an EU-wide issue that needs to be tackled by the entire 28-member bloc, British Home Secretary Theresa May and French Interior Minister Bernard Cazeneuve said Sunday.

France Should Compensate UK Losses Over Calais Crisis - UK Labour Party
MOSCOW (Sputnik) – In a joint article published by The Sunday Telegraph, the French and British counterparts called the latest attempts by hundreds of refugees to cross over into the United Kingdom a “global migration crisis.”

“This situation cannot be seen as an issue just for our two countries… That is why we are pushing other member states – and the whole of the EU – to address this problem at root,” May and Cazeneuve said.

The two officials said the ultimate goal lies in reducing the number of migrants crossing the Mediterranean Sea into European shores.

They named increased development aid and investment, as well as cooperation with to fight illegal migration and facilitating easier returns to migrants’ homelands in the Middle East and Africa, as some of the solutions to the crisis.

“Our streets are not paved with gold,” May and Cazeneuve stressed.

The two officials said migrants used Greece and Italy, among other members of the bloc, as paths on their way to Calais and, eventually, Folkestone in Kent County.

Another mass attempt to break into the Channel Tunnel was reported overnight, with 200 migrants breaching several levels of security fencing before French riot police dispersed the crowd.

Last week alone, an estimated 3,500 attempts were said to have been made to enter the Channel Tunnel on passing trucks and trains headed for Britain. These attempts resulted in several deaths among the migrants and traffic disruptions in the tunnel.

The French and British counterparts agreed to cooperate on the issue early in July after migrants in Calais took advantage of a ferry strike to cross into the United Kingdom. London pledged $15 million to boost security at the French port in September 2014.

On Tuesday, the UK Home Office announced it would allocate nearly $11 million to strengthen Channel Tunnel security. British authorities have confirmed plans to build a new 1.2-mile fence around the Eurotunnel rail terminal near Calais.