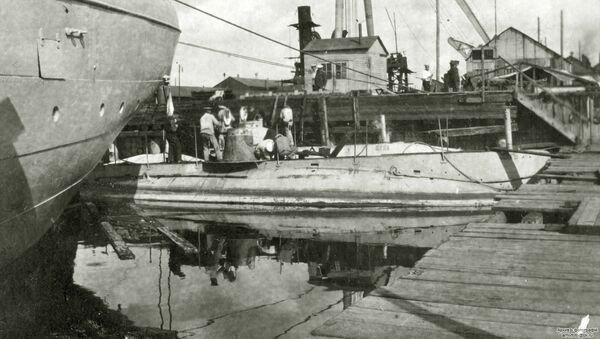 The actual object of the ‘hunt' in Swedish waters was never a Russian submarine, but Swedish neutrality, claims Canadian independent research and media organization Global Research.

A story of a sunken Russian submarine recently found in Swedish territorial waters has been all over news outlets this week, making devoted followers of the endless saga shiver with excitement. The supporters of "Russian Threat" theory had to face disappointment once again as the alleged threat turned out to be a hundred-year-old war relic.

The United States has  always wanted to see Sweden integrated into NATO while the latter remained nationally neutral, and that is the true reason behind the epic submarine "witch hunt", according Israel Shamir, writing for Global Research.

"Now we know for certain the Russians had intruded into Swedish waters! The Swedish admirals… probably feel themselves vindicated, as they always said so. Does it matter that the U-boat was sunk one hundred years ago, in 1916?" — Shamir ironically questioned.

Back to Surface: Old Russian Sub Found in Swedish Waters Could Be Lifted
This week's incident is nothing more than yet another volume of The Russian Submarine chronicles, written by the Swedish navy. In October 2014, Sweden already spent millions of krona on a pointless search of a Russian submarine in the Stockholm archipelago. As a result, the intercepted distress signal allegedly sent to the Russian naval base in Kaliningrad was proven to be sent by a Swedish transponder and no "treasure" was found in Swedish waters.

According to Wilhelm Agrella, professor of Intelligence Analysis at Lund University, the mysterious submarine was invented by the Swedish navy with the purpose of getting funds to boost its budget.

Similar cases date back to Soviet Era. On numerous occasions American and British submarines impersonated Soviet ones in order to seed suspiciousness and distrust towards the USSR among Swedes.

Swedish Divers to Examine Russian Submarine on Weekend – Explorer Company
A leading Norwegian military expert Ola Tunander, who investigated the cases, gained access to all files at the request of the Swedish government after the fall of the Soviet Union. His conclusion was that all the evidence about the Russian submarine incursions was falsified or invented. In his study Tunander claimed that all the falsification was organized by the Swedish military that conspired with colleagues in the US and Britain against its Social Democrat government.

As a Social Democrat government came to power again in September 2014, the story repeated with the Swedish Army, Navy and pro-NATO media plotting against independent Russia, resulting in The Hunt for Red October in 2014, Shamir writes.

For some reason the Swedish media never mentions NATO planes flying close to Russian borders through Swedish airspace, yet whenever Russian air force training flights take place, the reports are right on cue.

"Russian policies towards Sweden and the West are marked with moderation, restraint and conservatism. They do not want to invade or conquer Sweden or other Western countries. Russia wants to be treated with respect." — Shamir says.

Russia never wanted to invade Sweden and is no threat, but the Swedish army and media are determined to portray it as its deadly enemy, Global Research claims, adding that this kind of attitude will do no good for the two great northern countries that have no dispute, no common border to argue about and no historic mishaps.